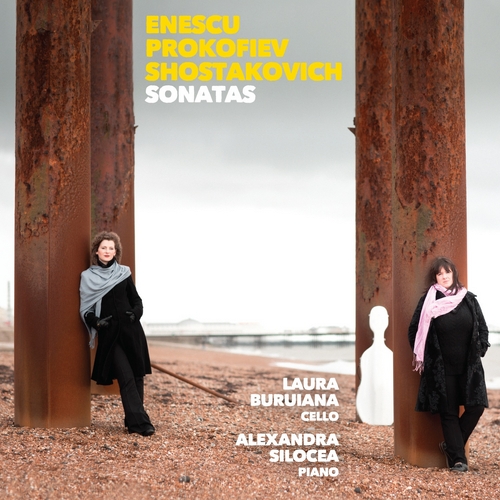 Dmitri Shostakovich (1906–1975):
Cello Sonata in D minor, Op. 40
Pianist Alexandra Silocea joins with fellow-Romanian cellist Laura Buruiana in two Russian staples of the repertory, the Sonatas of Prokofiev and Shostakovich, with a much rarer offering by compatriot George Enescu, the single-movement Sonata in F minor, an early work that only recently came to light. Both Russian works bear the influence of the cello titan Mstislav Rostropovich. Enescu’s was penned in 1898 while he was a teenage student at the Paris Conservatoire; the manuscript was rediscovered 90 years later. Silocea has distinguished herself on previous AVIE releases in repertoire ranging from Debussy and Ravel to Liszt and, notably, Prokofiev. Among Buruiana’s distinctions is first prize in the New York-based Young Concert Artists competition in 2003, and a PhD summa cum laude from the National University of Music in Bucharest, where she devoted her thesis to the Enescu F minor Sonata.

“a bona fide virtuoso, drawing a wealth of color, drama and flowing line from her instrument” – The New York Times (on Laura Buruiana)

“this premier album may turn out to be a revelation” – Audiophile Audition (on Alexandra Silocea’s Prokofiev Sonatas 1- 5, AV 2183)

“grade A marks. Her playing continues to fascinate, to inspire; and it only seems to get better with time.” – Fanfare (on Alexandra Silocea’s Sound Waves, AV 2266)