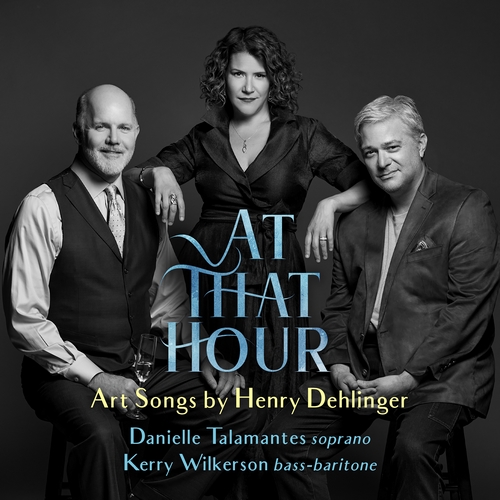 Dehlinger: At That Hour - Art Songs by Henry Dehlinger

Ten Poems of James Joyce:
At That Hour When All Things Have Repose
Bahnhofstrasse
On the Beach at Fontana
Simples
Alone
Flood
Strings in the Earth and Air
Night Piece
Tutto e sciolto
A Memory of the Players in a Mirror at Midnight

Oscar Wilde:
Requiescat
San Francisco-native Henry Dehlinger, a prodigiously talented pianist and singer, turned his hand to full-time composition in 2015. The skill and splendour of his music belies the relatively brief number of years he has committed pen to paper to create a considerable oeuvre of orchestral, chamber and choral music. His natural affinity for vocal music has also led to a number of works for solo voice. At That Hour is a superlative showcase for Henry’s craftmanship as well as his close collaborators, husband-and-wife team soprano Danielle Talamantes and bass-baritone Kerry Wilkerson. All of the songs on this original album of Henry’s art songs were written expressly for Danielle’s and Kerry’s impassioned voices.