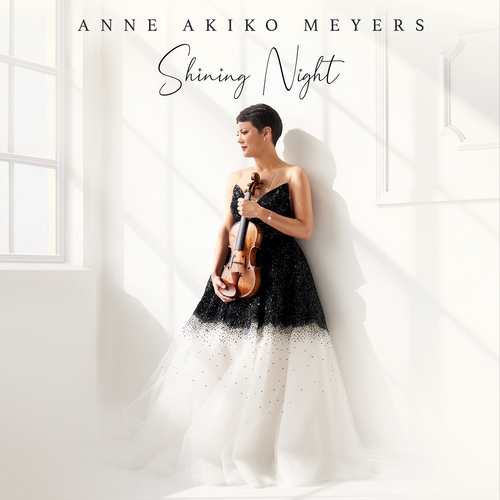 Duke Ellington:
In My Solitude

Morten Lauridsen:
Dirait-On
Sure On This Shining Night
Anne Akiko Meyers has amassed a multitude of fans and admirers for her exquisitely curated recordings, often exploring her passion for new music, and old music in new guises. Her quest for creative collaborations has inspired countless commissions and world-premieres, with the results infusing Shining Night, an album that embraces themes of love, poetry and nature.

Anne’s fruitful association with composer Morten Lauridsen led to the arrangement of his popular choral work Sure on this Shining Night, for violin and piano, lending its name to the album’s title. From there springs forth an album imbued with music of light and hope, spanning the history of music through Baroque, Romantic, Popular, and current genres.

J.S.Bach’s beautiful Air in G and Corelli’s colourful La Folia – arranged for violin and guitar – rub shoulders with Latin-tinged Estrellita (Little Star) by Manuel Ponce, the Aria from Villa-Lobos’ Bachianas Brasileiras No. 5, and Piazzolla’s Histoire du Tango. Two of the 20th century’s most iconic songs appear in intimate and tender new arrangements: Duke Ellington’s (In My) Solitude, and Can’t Help Falling in Love, famously crooned by The King of Rock and Roll, Elvis Presley.