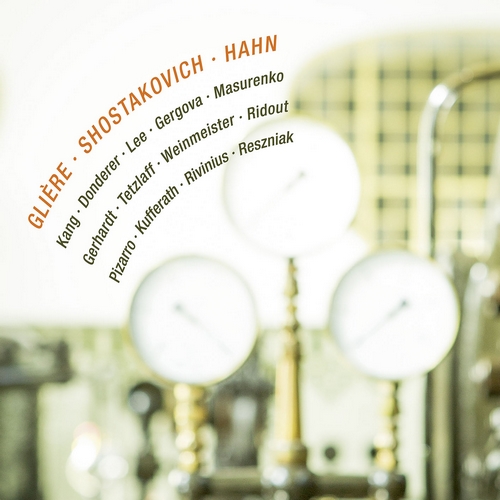 Dmitri Shostakovich:
Two Pieces for String Octet, Op. 11
GLIERE: „ Of all the major Russian composers, Reinhold Gliere is one of the least well known in the West. His life spanned a vast period from the Czar’s reign to Soviet dictatorship, and he made it through the Stalin era relatively intact by mostly avoiding conflict without losing face. Such dilemmas were to haunt the lives of Gliere’s pupil Prokofiev, and especially that of his colleague Shostakovich, 30 years younger, but they were not yet current in 1900, when 20-year-old Gliere, still a student, injected all of his youthful verve into composing his String Octet in D Major, Op. 5. The work soon gained immense popularity in Russia, where, still today, Gliere’s Octet is sometimes even held in higher esteem than the likewise youthful and fresh String Octet by Mendelssohn.

Whereas Shostakovich’s well-known 8th String Quartet and 2nd Piano Trio both bear the traces of inner anguish in the face of global and personal tragedies, the Two Pieces for String Octet, Op. 11 let us look back upon the beginning of an outstanding musical career that was nevertheless overshadowed by harsh difficulties. These two pieces with The headings Prélude and Scherzo are from the period when Shostakovich was still a student in Saint Petersburg…..” (from the line notes Pedro Obiera)

Reynaldo Hahn was a fellow student of Maurice Ravel at Paris Conservatoire. He was born in Caracas, to where his father, a Hamburg businessman, had moved. His mother was from Venezuela. Hahn studied composition with several professors including opera composer Jules Massenet. He was in close contact with the Paris art scene and later became a close friend – intermittently also the companion – of author Marcel Proust. Reynaldo Hahn gained considerable renown with his song cycles, operettas, and ballets….. His Piano Quintet in F Sharp Minor (1922) is a rhapsodic work in the lineage of French Late Romanticism …….(from the lines Notes by Matthias Corvin)
Live recordings (June 2018) from the SPANNUNGEN Festival, Heimbach/Germany, innogy-Wasserkraftwerk/Hydroelectric plant