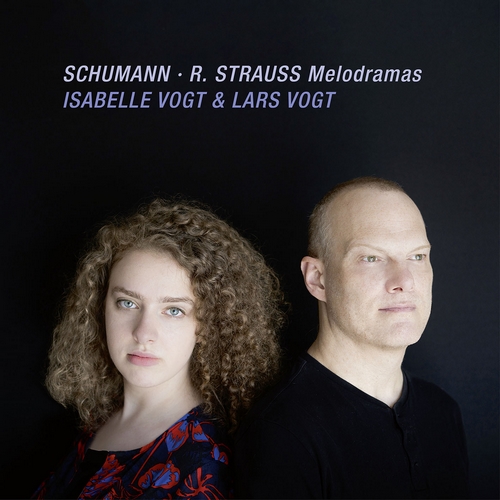 What gave you the idea to record these works together?

Isabelle: It was originally Papa’s idea. Ever since the age of four, I have been involved in acting and reciting. Until now we had only worked on recitation combined with music – but then he stumbled upon the musical melodramas of Robert Schumann. I didn’t even know what a melodrama was!

What is a musical melodrama?

Lars: In Schumann’s case, the subtitle on the frontispiece says “Declamation with pianoforte accompaniment”: we thus have a theatrical element. And whenever the piano joins in, we not only have the spoken word but also a musical background, at times directly placed under the text – and the music has an influence on the declamation.

The choice of musical melodramas is rather large: what were your reasons for selecting these?

Lars: By chance, I knew of these two Schumann melodramas: the Ballad of the Heathland Lad and The Refugees, and I was also aware that they had a menacing, spooky atmosphere. That was around the time when Isabelle was 15-16 years old. She loved the Harry Potter saga, for instance, and I said to myself: these are stories and moods in which Isabelle can really get cracking: the content is slightly gory and scary. I was certain she would have fun with them.

Isabelle, did you find that this was the kind of setting where you could feel that you were “in your element”?

Isabelle: Absolutely! For instance, I always found Schubert and Goethe’s Erlkönig fascinating, and these ballads are quite similar in terms of mood. I remember getting goosebumps the first time I heard Schumann’s Heideknaben. At first, I found it strange to get used to such an interplay between music and the spoken word. I had never heard anything like it before.