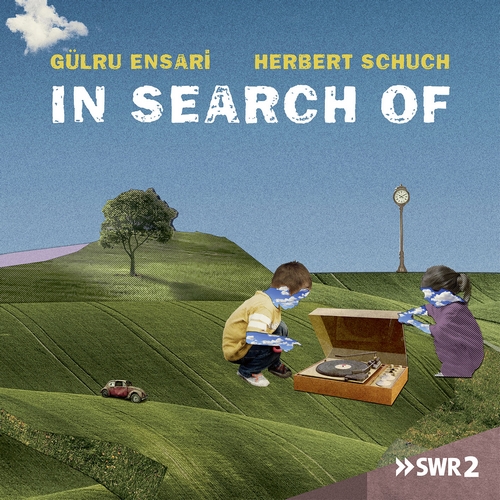 Brahms / Dvorak / Czajkowski: In Search of

Oguzhan Balci:
Sarmal, for Piano four Hands
Although they each spent their childhood in thoroughly different circumstances, Herbert Schuch and Gülru Ensari feel somehow connected through memories of their first musical moments. Herbert grew up until the age of nine in the Romanian countryside near the Hungarian border, during the bleak last years of communism.

Born in Istanbul, Gülru grew up as a city dweller. “We both had a record player at home”, she remarks, to show what they had in common. Now, as a married couple and piano duo, they have found time and leisure during the pandemic to look back on the past. Overjoyed by the birth of their daughter, they shared memories of certain moments from their own childhood that seem to stand still in time.

For this album, “In search of...”, they looked for music they associate with those moments. In so doing, they were also searching for their own identity. Herbert belongs to the minority of the Banat Swabians: “Although there was no direct Hungarian lineage in my family, the language and culture of Hungary played a significant role in our lives. Conversely, although we were in Romania, we practically had no points of contact with Romanian culture”, he remembers. “The pieces we played at home back then would have seemed out of place on this album; in my parents’ home, we exclusively played the Hungarian operetta tunes that were en vogue. My uncle sang, and he was accompanied at the piano by my father, who had brought back LPs from the GDR.”

On the other hand, in Istanbul, Gülru was strongly influenced by Western culture. At home, she only heard Classical music: Brahms, Dvorák, Tchaikovsky – the composers now featured on this CD. “I grew up with VHS videotapes. I watched Disney’s Sleeping Beauty and Fantasia countless times, with the original music from Tchaikovsky’s ballets”, she remembers. In search for similar memories from childhood, Tchaikovsky was the first common denominator the couple found that they shared. “We both remember having listened to the Nutcracker Suite when we were children”, Herbert remarks.
Recording: III/IV 2021, SWR Stuttgart, Funkstudio.