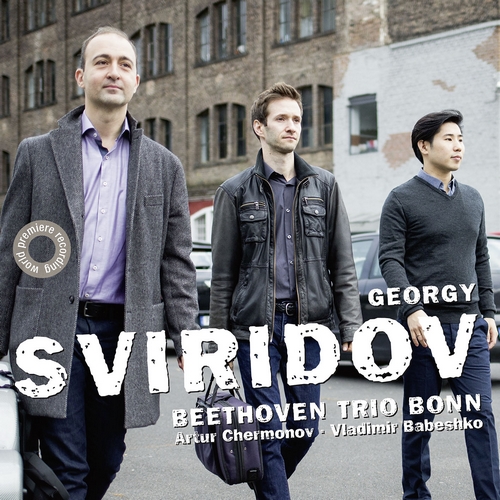 Trio for Piano, Violin and Cello in A Minor (1945/rev. 1955)
Quintet for Piano, 2 Violins, Viola and Cello in B Minor (1945)
Romance from The Snowstorm, musical illustrations after a novella by A. Pushkin, for Orchestra
Georgy Sviridov’s most impressive musical works featured the human voice: romances, cantatas, oratorios, and hymns. His instrumental chamber music is less well-known, but makes up a valuable and essential portion of his musical legacy. If we divide music into three types according to Boethius, we can affirm that musica humana is well and alive in Sviridov’s musica instrumentalis. The result is actually a new synthesis, equivalent to what we conventionally call musica mundan?, “universal music”. With that term we certainly do not mean World Music – which has resulted from cultural globalization – since Sviridov, quite to the contrary, was a down-to-earth, authentic Russian composer. All of this confirms the time-honoured, well-known truth that the world only starts interesting itself for an artist when his art draws its authentic roots from folk culture.

Sviridov wrote most of his piano pieces and instrumental music at a time when he was bringing his unmistakeable individual style and unique artistic approach to full fruition. Today, that style is admired as a harmonious blend between Russian folk music traditions, “universal music”, and certain progressive 20th-century ideas (which Sviridov only applied quite selectively). The period when he wrote the larger portion of his instrumental output corresponded with a time of great historical distress. He finished his studies under Shostakovich at Leningrad Conservatory in June 1941, shortly after Hitler invaded the Soviet Union. During the very first days of the war, Sviridov was enrolled in a military academy. Later on that same year, he was dismissed from the army due to extreme myopia and transferred to the city of Novosibirsk, where the Leningrad Philharmonic had been evacuated... (from the liner notes by Iossif Rajsskin)
Recording: VI 2016, Bayerischer Rundfunk München, Studio 2