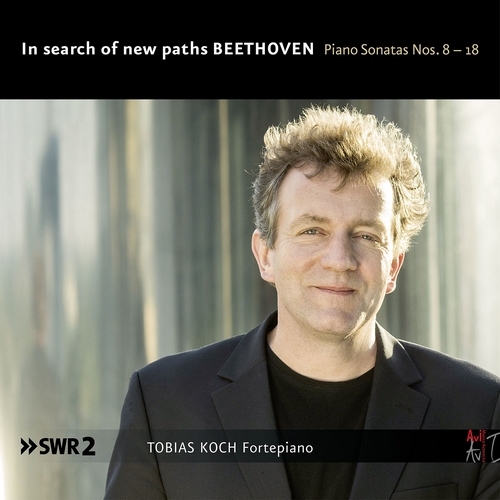 Beethoven: In Search of New Paths

CD 3:
Piano Sonata No. 16 in G Major, Op. 31 No. 1
Piano Sonata No. 17 in D Minor, Op. 31 No. 2, 'The Tempest'
Piano Sonata No. 18 in E Flat Major, Op. 31 No. 3, 'The Hunt'
“This recording of eleven Beethoven sonatas was made by Südwestrundfunk during several recitals entitled Beethoven – in search of new paths, which I had the honour of giving within the framework of the long-established Bad Krozingen Castle Concert Series. These sonatas were written in short succession from 1797 to 1802: one practically led to the next. It was the same period in which Beethoven is said to have revealed to a friend that he was “dissatisfied with his previous works” and intended to “embark on a new path”. Indeed, in those years, the composer seems to have stepped on the turbo accelerator, innovating sonata form in a series of energetically concentrated experiments.

Whenever we, as artists, reconsider our approach, new horizons are opened. Starting with a massive, powerful thunderclap at the beginning of the Grande Sonate pathétique – his first highlight in the genre – Beethoven’s variegated compendium of unique sonatas rapidly attained previously unimagined dimensions with the polymorph metastructures of the Opus 31 sonata trilogy. That tempestuous, late 18th-century quest-hunt produces tensions which I attempt to take as a point of departure to explore new paths and to embark on adventures of interpretation. My explorations begin “behind the notes”. Beethoven’s musical propositions are often bold, unconventional, and extreme, something which we often tend to overlook and smooth out with today’s knowledge of all that was to come. I not only resorted to the new Beethoven editions by Jonathan del Mar based on autograph manuscripts and first printings as a compass in my quest, but I also used Barry Cooper’s detailed, critically enlightened edition, a beacon for our times.