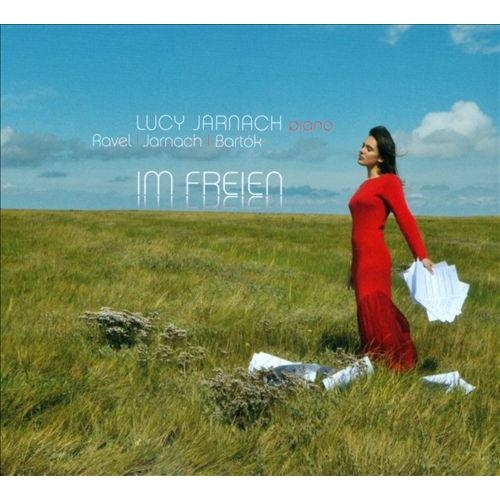 Bela Bartok:
Im Freien
This album bears the title of Bartók's suite Im Freien (Outdoors), which receives an attractive performance from German pianist Lucy Jarnach. But her main aim in making the album seems to have been to promote the music of her grandfather, Philipp Jarnach, who is nowadays largely forgotten despite being one of the leading lights of composition in 1920s Germany. Indeed, it seems from these Drei Klavierstücke, Op. 17, of 1924 that the effort is warranted. Neo-classicism was stronger in France and Italy than in Germany, but its impact was international, and Jarnach here emerges as distinctively German exponent of the style (he was of Catalonian and Flemish background and was born in France, but moved to Germany after World War I and stayed there for the rest of his life). Both Jarnachs had famous teachers; the granddaughter's was Alfred Brendel, and the grandfather's Ferruccio Busoni. Busoni's influence is evident in the quasi-Baroque style and involved linear counterpoint of these three rather thorny little works, but the chromatic tonal language shows that the composer had an ear cocked toward contemporary German and even Austrian developments. Like Busoni's, the music represents a serious neo-classicism, but the flavor is different. Lucy Jarnach's performance of Ravel's Gaspard de la nuit, recorded over two sessions nine months apart, doesn't ever take wing, but the program as a whole, with three works in which the neo-classic impulse is mixed with a strong external influence, makes good sense. Recommended for those interested in the music of the 1920s.