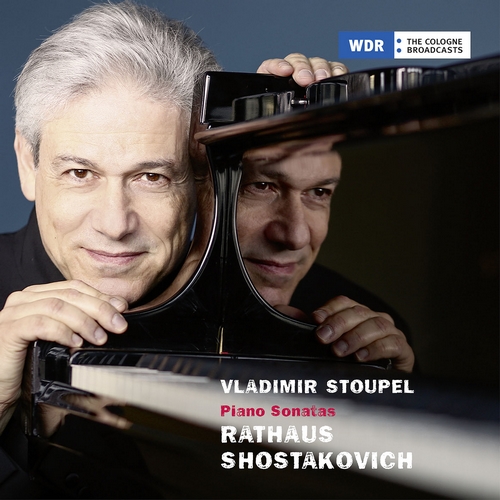 CD 2:
Dmitri Shostakovich:
Piano Sonata No. 1, Op. 12
Piano Sonata No. 2 in B Minor, Op. 61
“Although Karol Rathaus (1895-1954) and Dmitri Shostakovich (1906-1975) were contemporaries, they could hardly have led more different lives. Both biographies nevertheless exemplify the 20th century with its catastrophes, persecutions and destruction, and it is thus worthwhile to feature their music together in the same program.

Born into a Polish Jewish family in Ternopil (then part of Austria-Hungary), Karol Rathaus started composing at a very early age. He was accepted into the Vienna Academy for the Performing Arts and Music in 1913, but his studies were suddenly interrupted by the onset of World War I: for the next four years, he would have to serve in the Austrian army. As one of Franz Schreker’s favorite students, he followed Schreker to the Hochschule für Musik in Berlin, where he passed the entrance exam with flying colors with his First Sonata for Piano in C Minor, op. 2 (1920). The Vienna publishing house Universal-Edition published the sonata and signed a ten-year contract with the young composer. This marked the beginning of the quasi-meteoric rise of Karol Rathaus, whom prominent German critics were starting to hail as “New Music’s greatest hope” (Walter Schrenk)

In December 1926, 20-year-old Dmitri Shostakovich presented his 1st Piano Sonata, op. 12, to the public in Leningrad. Certain parallels with Rathaus’s 3rd Sonata are striking: driving momentum, rapid changes of mood, a complex and technically challenging piano texture, free tonality, and a bustling metropolitan mood. In Shostakovich’s sonata we additionally encounter a series of clusters along with a grotesque aspect….” (Excerpt from the liner notes by Vladimir Stoupel)