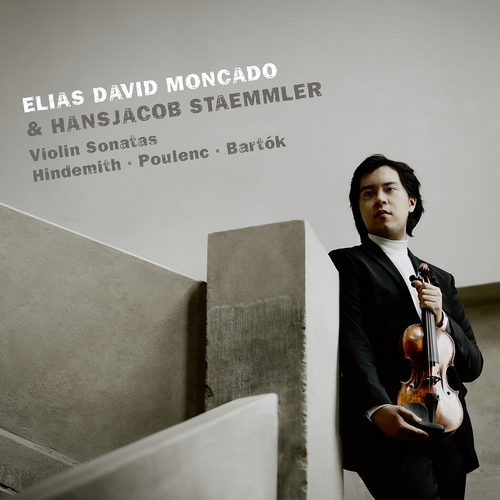 Bela Bartok:
Violin Sonata No. 1, Sz 75
For your debut album, what motivated you to choose a rather difficult program with works by Hindemith, Bartók, and Poulenc? Are they currently your favorite composers? Have you performed these works often in recitals? As an artist, I find it fascinating to observe how composers reacted to current affairs: whenever they had to deal with a totalitarian regime, persecution, resistance, or exile.

Each of these three composers dealt in some special way with psychological stress and anxiety in their lives. In the Poulenc sonata I find a concealed passion, harsh brutality, and overwhelming pain. The Hindemith sonata contrasts and juxtaposes sombre, dancelike, and heroic elements. The timbres in the Bartók are incredibly elaborate, and a general mood of suffering imbues the entire work.

What makes works of the early 20th century so interesting for a young violinist such as yourself? Do you find them easier or more difficult than music from the 18th or 19th centuries?

For me, the 20th century is one of the most thrilling and drastic periods in history: this is reflected in the music. Composers took greater risks and experimented with a number of new playing techniques. I would find it hard to say which periods I generally find easier or more difficult. Each style has its own particular challenges; still, I generally manage to develop a good rapport with all the pieces I work on. Works of the 18th and 19th centuries are evidently more often performed and recorded than those of the 20th.

The great number of “benchmark recordings” of works of the 18th and 19th centuries means that you tend to be compared with those interpretations and placed under greater scrutiny. Certain personal approaches adopted by famous artists have become widespread. In works of the 20th century, however, I feel a much greater artistic freedom. (excerpt from the booklet interview)
Recording: V 2021, Bavaria Musikstudios, München. Piano: Faziolo F308. Elias David Moncado plays a violin by Giambattista Rogeri, Brescia (around 1700).