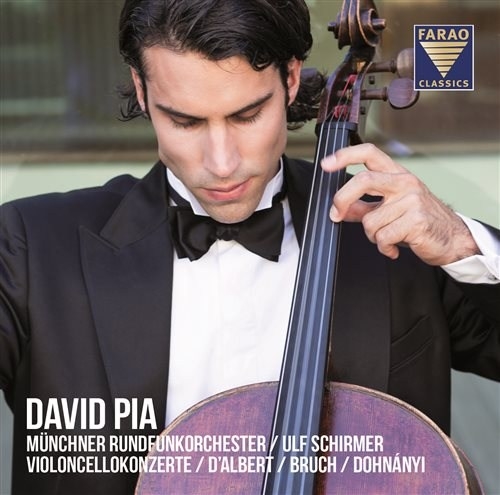 Ernst von Dohnanyi:
Konzertstück in D Major for cello and orchestra, Op. 12
David Pia’s first solo concerto release offers up four high quality works from the Austro-German tradition. They date from the twilight of the late-romantic era and were all written within a couple of decades of each other. Kol Nidrei is a repertoire staple which here is joined by some rarely encountered works. Pia came to prominence in 2007 as a prize-winner in the International Tchaikovsky Competition in Moscow. As recently as 2008 he was principal cellist of the Münchner Rundfunkorchester. Pia is a grandchild of Karl Richter, renowned founder and director of the Munich Bach Choir. He is a former pupil of Antonio Meneses at Basel Music Academy and Clemens Hagen at the Salzburg University Mozarteum. The first work, D'Albert's Cello Concerto was written for leading German virtuoso Hugo Becker. Reminiscent of the music of Brahms, this is an attractively melodic work brimming with charm. It displays the soloist's expressive tone to admirable effect. Dohnányi’s Konzertstück with its song-like melodies is a soothing and agreeable work and was also written for Hugo Becker. It has three distinct movements and is a cello concerto in all but name. Despite its generosity the score lacks the memorable qualities of the Tchaikovsky Rococo Variations and the Saint-Saëns cello concertos. Pia's playing is ravishing in the Adagio and his rich and low register is notable. A much recorded work and enduringly popular, Bruch’s Kol Nidrei is a rather plaintive piece. It is based on traditional Hebrew melodies evidently written for the Jewish community in Liverpool. Here the assured Pia gives a haunting performance that feels highly engaging. Even so, I was surprised he didn’t provide a touch more passion. An affectionate single movement work with such innocent charm, the Canzone is Bruch at his most generous. Sadly it's nowhere near as well known as the Kol Nidrei. The orchestral playing that supports the cello line is lovely. Pia plays the Stradivari cello De Kermadec Bläss (1698) which has a burnished tone. Pia, with rare artistry, excels throughout in poise and security. His playing is well focused and there's a remarkable purity of sound which coupled with a distinctive intimacy captures the true spirit of the music. Providing the finest possible support, Schirmer conducts the marvellous Münchner Rundfunkorchester in vibrant and wholly secure accounts. The warmish sound is remarkably clear and well balanced. In the accompanying booklet there is a helpful essay ‘Bridges of Tradition’ written by Christoph Schlüren. There is some competition in the case of the D'Albert Cello Concerto and Dohnányi Konzertstück. They appear on a 2005 Hyperion album played by soloist Alban Gerhardt with the BBC Scottish Symphony Orchestra under Carlos Kalmar. Coupled with the Enescu Symphonie concertante this is a desirable programme and although well played by Gerhardt it can’t match this Pia performance. Hats off to David Pia for sacrificing the more obvious works and selecting mainly unfamiliar, yet eminently attractive repertoire. Compellingly played to an elevated standard I cannot praise this album highly enough.