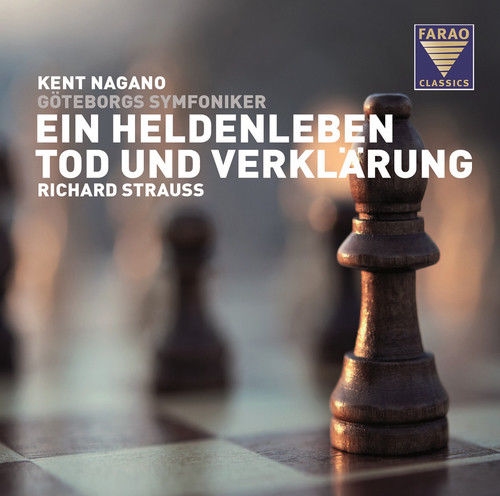 Ein Heldenleben, Op. 40
Tod und Verklärung, Op. 24
This is the second recording of the Strauss trilogy with Sweden’s national orchestra under the baton of its Principal Guest Conductor Kent Nagano. As the long-time General Music Director of the Bavarian State Opera, Kent Nagano possesses a deep understanding of the music of Richard Strauss, the Munich Strauss tradition, and authentic sources stemming from the Strauss family. What is less well known is that the Gothenburg Symphony Orchestra can also lay claim to an impressive Strauss tradition. As early as its very first concert season in 1905/06, the orchestra performed Don Juan. Death and Transfiguration, conducted by Wilhelm Stenhammar, was added to the repertoire in 1912, and Ein Heldenleben formed part of the orchestra’s programmes in the 1970s. In this new production of one of the most often-recorded orchestral works, Kent Nagano has chosen what is for him a characteristic approach: The life path of the hero Richard Strauss is not presented in a superficial and obvious way, reduced to purely illustrative programme music that owes its effects to the overwhelming power of an enormous orchestral apparatus. Instead, Nagano and the Gothenburg Symphony Orchestra seek out the nuances, the compositional and tonal details – and reveal the brokenness experienced by the hero, the inner emotions, perceptions, and self-doubt found beneath the surface of the score, which often tends to be interpreted one-dimensionally. The great violin solo that is a portrayal of Strauss’s wife Pauline is usually performed by the first concertmasters of the major orchestras. But here Sara Trobäck, First Concertmaster of the Gothenburg Symphony Orchestra, offers an unexpectedly different view of 'The Hero’s Companion'. When we hear the final phase of the life path traversed by Strauss’s 'hero', Nagano’s interpretation reveals to us the idealized late Romantic idiom in which the 34-year-old composer cast his two main characters.This reading ties in perfectly with the tone poem Death and Transfiguration, in which Richard Strauss and Kent Nagano tell us a very similar human story.
Recorded at the Gothenburg Concert Hall, 15-20.02.2016