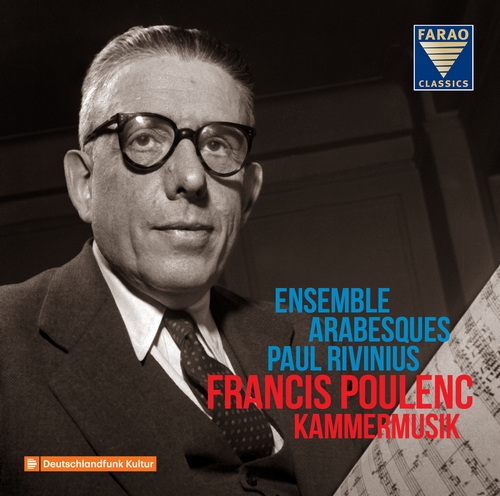 Trio, FP 43
Sextett, FP 100
Sonata for flute and piano, FP 164
Sonata for clarinet and piano, FP 184
Sonata for oboe and piano, FB 185
Wind instruments occupy a central place in Francis Poulenc’s chamber music oeuvre. Starting from the first half of the twentieth century, french composers and orchestras gave prominence to the woodwinds, lending their works the distinctive „French sound“ and style of which Poulenc was one of the greatest ambassadors.

With his three sonatas for flute, clarinet, and bassoon, Poulenc set standards that remain to this day; his sextet is a milestone in music history.

Francis Poulenc Chamber Music is the second concept album of the Ensemble arabesques. Their first, Gustav Holst Chamber Music, was released in 2017. The English composer’s fame rests on his enthusiastically acclaimed work The Planets, which eclipsed his previous compositions. The fact that the latter merit much greater attention is attested to by his chamber music works, characterized by their dreamlike gracefulness and still indebted to late Romanticism, to which the ensemble has devoted itself with great success.

The third album is already in preparation and will be entitled Jacques Ibert Chamber Music.
Recorded at the Deutschlandfunk chamber music hall Cologne, April 2018.