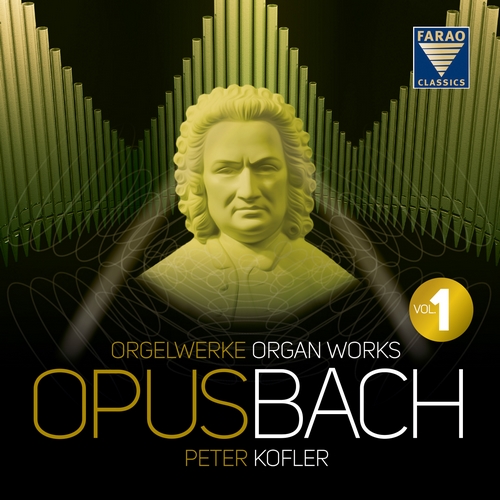 CD 5:
Concerto, BWV 594
Kirnberger chorales, BWV 730, 731, 741, 714, 717, 711, 715
Prelude and fugue, BWV 539
Eighteen Leipziger chorales, BWV 657, 658
Fantasias, BWV 573, 570, 572
Orgelbüchlein, BWV 639-644
In March 2017 organist and harpsichordist Peter Kofler launched his ongoing Bach project: a complete recording of Johann Sebastian Bach’s organ works. Unlike performers of earlier complete recordings, Kofler opted for a “modern” instrument for this enterprise. For not only was J. S. Bach the perfecter of a great polyphonic era, he was an innovator and stimulator as well, particularly in the field of organ music. Be it the introduction of the tempered tuning system, the virtuoso use of the organ pedal or the development of the fortepiano: Bach significantly contributed to each of them and was one of the first to employ the possibilities of these modern developments. The four-manual Rieger organ at the Jesuit church of St. Michael’s in Munich with its 75 stops offers many of the characteristics verifiably valued by Bach. It features an imposing fortissimo and a multitude of characteristic stop timbres that the cantor of Leipzig’s Thomaskirche partly could only dream of in his days.

This is the first ever organ recording using high-resolution Auro-3D technology, a consequent advancement from earlier surround formats like 5.1, 7.1 or 2+2+2. Thus the space of the church interior is authentically reproduced not only in its horizontal dimensions, but also in its vertical acoustics, its spatial height. A sound experience that provides fascinating transparency even on a conventional stereo CD. Various high-resolution multichannel formats are available for download on the website opusbach.de.
Recording: Jesuit church St. Michael, Munich - 2017-2019