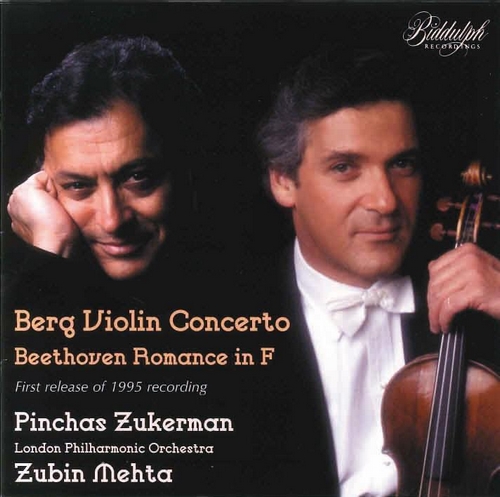 Joachim:
Hebrew Melodies Op. 9
Listening to the quality of the playing on offer in this recent release, I’m rather perplexed as to why these recordings are only now making their first appearance on CD. The booklet doesn’t offer any explanation. They were set down in the early to mid-nineties, and are now issued under licence from Sony. I’m thrilled to see Biddulph back after a long absence, as I’ve acquired a substantial amount of their catalogue over the years; let’s hope they’re here to stay.

The Beethoven Romance for violin and orchestra No.2 in F Op.50 is a spacious account and broadly paced. The performance is notable for its reverential and aristocratic bearing. Zukerman’s long lines and eloquent phrasing are convincing in every way. I would have preferred the violinist to have been more forwardly placed in the sound-picture though. It’s a pity we haven’t also got its running mate the G major Op. 40.

The Concerto ‘To the Memory of an Angel’ is the most substantial work of the set. This is Berg’s reflection of his deep sense of loss at the death of the eighteen year old Manon Gropius, daughter of his friends Alma Mahler and Walter Gropius, from infantile paralysis in 1935. A pall of sorrow and tragedy hangs over the performance, and Mehta sets a mood of darkness and intensity in the opening bars. The tangible sadness and anguish are echoed in Zukerman’s contouring of the tortuous line. His large-scaled playing with many shades of tonal colour befit and benefit a canvas such as this. Mehta is particularly successful in twentieth century repertoire, and skilfully reveals the details and secrets that lie within the score. The reading is suitably decked with introspection and angst. The Bach’s chorale Es ist genug, incorporated into the last movement, is a contemplation of death, resignation and transcendence, and its appearance gives the feel of a cathartic release.