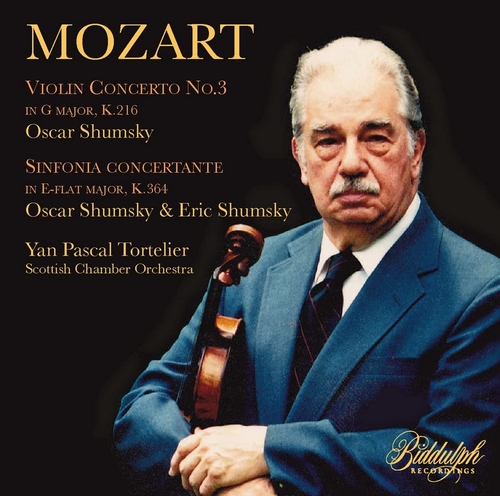 Biddulph - BID 85014-2
Kompozytor
Wolfgang Amadeus Mozart (1756-1791)
Wykonawcy
Oscar Shumsky, violin
Eric Shumsky, violin
Scottish Chmaber Orchestra / Yan Pascal Tortelier
Violin Concerto No. 3, K.216
Sinfonia Concertante, K.364
Mozart’s Violin Concerto No.3 in G, K.216, was composed at the age of 19, and is generally regarded as the composer’s first mas-terpiece for solo violin and orchestra. Oscar Shumsky’s recording of the work was made in 1985, following his sensational return to the UK after over 40 years following the Second World War. Not only is this Shumsky’s only commercial recording of the work, but it is also supplemented by the violinist’s own cadenzas for all three movements. The recording of the Third Concerto is paired with Mozart’s Sinfonia concertante, one of the composer’s most sparkling works, in which Shumsky is joined by his son Eric on the viola. This recording was one of the first digital recordings ever made, and was initially released on LP only by EMI. Biddulph Recordings is proud to finally reissue this recording in digital format nearly four decades after its initial release.