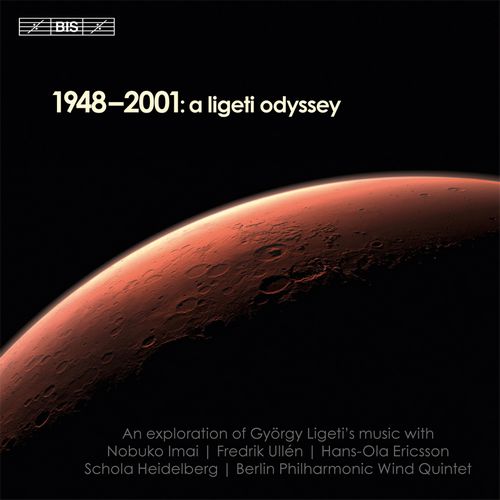 Bis - BIS 1503
Kompozytor
Gyorgy Ligeti (ur. 1923)
Wykonawcy
Fredrik Ullén, piano
Berlin Philharmonic Wind Quintet
Hans-Ola Ericsson, organ
Nobuko Imai, viola
Schola Heidelberg / Walter Nussbaum
Invention for piano (1948)
Six Bagatelles for wind quintet (1953)
Volumina for organ (1961–62, rev. 1966)
Lux aeterna for choir a cappella (1966)
Ten Pieces for wind quintet (1968)
Sonata for Viola Solo (1991–94)
Three Études pour piano (1985–2001):
Touches bloquées
Canon
A bout de souffle
This chronological exploration of the musical universe of György Ligeti begins in 1948, with a brief piece for solo piano composed by a 25-year old music student in Budapest and ends with his final compositions, also for solo piano, when Ligeti had long since become established as one of the truly great figures of 20th-century music. On the way, it takes in a number of works which demonstrate the kaleidoscopic qualities of the composer and his oeuvre – from the sharply delineated sense of humour displayed in the Six Bagatelles to the otherworldliness of Lux Aeterna (used by Stanley Kubrick in his film 2001 – a space odyssey), and the sheer mass of Volumina for organ, in which the performer uses elbows, arms and the palms of his hands in order to strike the largest possible number of keys at the same time. The music and its creator are described in an enlightening essay by the musicologist Arnold Whittall, who quotes a remark by Ligeti himself as one explanation for this almost bewildering range of moods and atmospheres: ‘every­thing that is direct and unambiguous is alien to me’. Ligeti’s ouvre certainly bears this out, while also testifying to another observation by the composer: ‘what is serious is at the same time comical, and the comical is terrifying’. The present, amply filled anthology brings together some seminal Ligeti works in interpretations that were highly praised when originally released, by performers of international standing, including Nobuko Imai, the Berlin Philharmonic Wind Quintet, Fredrik Ullén and Hans-Ola Ericsson, as well as the eminent vocal ensemble Schola Heidelberg.