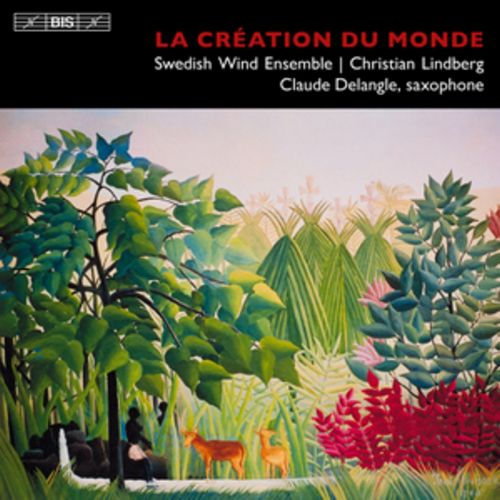 John Williams, arr. J. Bocock:
Catch Me If You Can for alto saxophone & band

Paul Creston:
Concerto for alto saxophone and band, Op. 26b

Ástor Piazzolla, arr. Teho:
Escualo for alto saxophone & bands
Chronologically, this programme of music for wind ensemble is framed by Darius Milhaud’s La création du monde, a ballet score from 1923, and the composer Anders Emilsson’s Salute the band, commissioned for the 2006 centenary of the Swedish Wind Ensemble. The remaining four compositions are all concertante works, featuring the French saxophone virtuoso Claude Delangle. The disc opens with Catch Me If You Can, based on a film score by John Williams, inspired by the progressive jazz movement of the 1960s. Jazz was an important source of inspiration for Milhaud as well, but in the case of La création – a retelling of an African creational myth – it was the kind of jazz that he heard in Harlem during a visit to New York in the early 1920’s. Also included on the disc is a substantial concerto composed in 1941 by Williams’ fellow-American Paul Creston, and a Divertimento by the French composer Roger Boutry, who re-orchestrated his 1961 original – scored for strings – for the purpose of this recording.

The disc closes with an arrangement of Ástor Piazzolla’s Escualo, a celebration in music of the composer’s favourite hobby, shark fishing. A most varied programme, thus, performed by ‘the mellowest, most subtle, liquid, and dreamy saxophonist’, to quote the American Record Guide, and the thirty-odd members of Sweden’s foremost wind ensemble, conducted by Christian Lindberg.