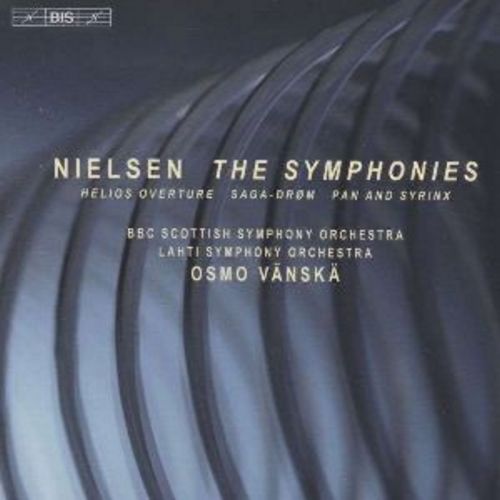 Symphony No. 1 in G minor, Op. 7
Symphony No. 2, Op. 16, FS 29, "The 4 Temperaments"
Helios, Op. 17, FS 32
Symphony No. 3, Op. 27, FS 60, "Sinfonia espansiva"
Symphony No. 4, Op. 29, FS 76, "The Inextinguishable"
Saga-drom (Saga-Dream), Op. 39, FS 46
Symphony No. 5, Op. 50, FS 97
Symphony No. 6, "Sinfonia semplice"
Pan og Syrinx (Pan and Syrinx), Op. 49, FS 87
Carl Nielsen has sometimes been described as the most underrated composer of the 20th century, but most critics would certainly agree that his Six Symphonies, composed between 1891 and 1925, belong to the great classics of their period. Osmo Vänskä’s cycle of the works with the BBC Scottish SO was recorded after his landmark series of the symphonies of Sibelius and before his highly acclaimed cycle of those by Beethoven. Originally released on three separate discs, these accounts of the Danish master’s works were received with great interest by the reviewers, with the performance of the Fourth being described as ‘of great character and fire’ in International Record Review, the recording of Symphony No.5 called ‘a first choice, full of intensity’ in BBC Music Magazine, and the Sixth accorded reference status in Répertoire. For this boxed set edition, three shorter orchestral works have been included, namely the concert overtures Helios and Saga-Dream, and the ‘pastoral scene’ Pan and Syrinx. In these previously unreleased recordings, Vänskä conducts the Lahti Symphony Orchestra, which he led for twenty years and with which he has enjoyed such notable successes in music by Sibelius, Kalevi Aho and Rautavaara.
TT: 4h 1m 23s