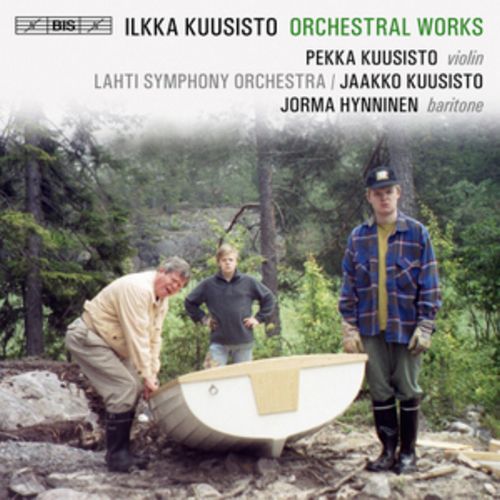 Symphony No.1 (1998)
Concertino improvvisando (2006) for violin and small orchestra
Kun talo alkaa soida (When the house begins to resound – cantata for baritone and orchestra, 1992)
Ilkka Kuusisto began his career as a jazz pianist at the age of 15, and has since been active in a number of fields, including the theatre, as an organist, a choral conductor and as chief executive of the Finnish National Opera. With such a background, it is not surprising that as a composer he is highly eclectic – a quality which Kuusisto has embraced wholeheartedly, comparing the result to ‘a stew that I am constantly stirring.’ Having composed several operas – including one about the Moomintrolls – Kuusisto was invited by the conductor Osmo Vänskä to write a symphony for the Lahti Symphony Orchestra. That work, which opens this disc, was composed in what Kuusisto describes as ‘a state of summer enchantment’, and the call of the cuckoo can indeed be heard only a few bars into the highly colourful score. For his Concertino improvvisando the composer turned to his son, the violinist Pekka Kuusisto, for advice about what kind of piece was lacking from the repertoire. Pekka, who like his father is intensely curious about all sorts of music, suggested a work which included plenty of scope for improvisation. Written-out and improvised passages merge imperceptibly, and the piece has an easy-going, folksy ambience, with each movement rooted in a tradition from a different continent. Closing the programme is a cantata for baritone and orchestra performed by the illustrious Jorma Hynninen. The text (in Finnish) juxtaposes the Bible, the Kalevala and Schopenhauer – but the score goes even further in its generous inclusion of different genres, with pride of place given to an accordion playing popular dance rhythms. Conducting the Lahti SO in these scores is another Kuusisto: Jaakko Kuusisto, who himself is an acclaimed violinist, as well as a conductor and composer in his own right – his father’s son, in short!