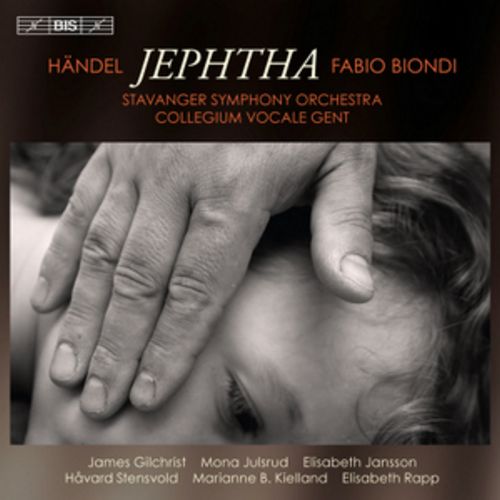 Bis - BIS 1864
Kompozytor
George Frideric Handel (1685-1759)
Wykonawcy
Collegium Vocale Gent:
James Gilchrist, tenor
Mona Julsrud, soprano
Elisabeth Jansson, mezzo-soprano
Havard Stensvold, baritone
Marianne B. Kielland, mezzo-soprano
Elisabeth Rapp, soprano
Stavanger Symphony Orchestra / Fabio Biondi
Jephtha (HWV 70) an oratorio (1751) with a libretto by the Rev. Thomas Morell
After finishing the chorus ‘How dark, O Lord, are thy decrees’ in February 1751, Handel noted in the autograph score that he couldn’t continue his work on Jephtha because of eye problems. Later in the year, he regained his eyesight and was able to complete the work in the autumn. The problems returned however, and in January 1753 a London newspaper reported that ‘Mr Handel has at length, unhappily, quite lost his sight’. Jephtha was thus to become Handel's last oratorio, and indeed his last major work. It is nevertheless no less a masterpiece than his earlier works, and contains some of his noblest music. The plot of this ‘Sacred Drama’ is loosely based on the story of Jephtha in the Old Testament: a father who in order to win the the Israelites’ struggle against the Ammonites makes a rash promise to God, and after his victory is compelled to sacrifice his own daughter. The situation gives rise to music of touching poignancy, as well as great choral set-pieces. This rousing live performance, recorded in 2008 in the Stavanger Concert Hall, boasts a roster of soloists headed by the fine British tenor James Gilchrist as Jephtha, as well as the eminent Belgian choir Collegium Vocale Gent, all backed up by the Stavanger Symphony Orchestra. At the helm of these large forces is Fabio Biondi, the Baroque violinist and conductor who since 2005 has been artistic director of the Stavanger orchestra in the baroque and classical repertoires.