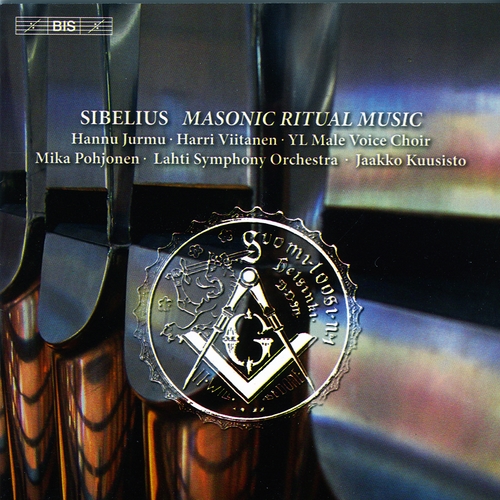 Masonic Ritual Music, Op.113:
Original version for tenor, male voice choir and organ
Arrangement by Jaakko Kuusisto (2007) for tenor, orchestra and organ
Freemasonry had reached Finland via Sweden in the mid-eighteenth century, but was banned after the country became part of Russia in 1809. In early 1922, after Finland had established its independence, a new Masonic lodge was formed – Suomi Lodge No.1. Among its first members was Jean Sibelius, who initially served as the lodge’s organist. At lodge meetings, Sibelius would played the harmonium, performing music by Mozart, Beethoven and Handel as well as improvising – at times so enthusiastically that he would have to be called to order by the Grand Master. It was also suggested that Sibelius should compose ‘special, genuinely Finnish music for the lodge’, but this did not happen until some years later, when he received a proper commission – and a fee – for the task. His Masonic Ritual Music, or Musique religieuse, received its first complete performance on 12th January 1927, but Sibelius returned to the work some twenty years later, adding two movements – Ode to Fraternity and Hymn – which are believed to be his last original compositions. The Masonic Ritual Music centres around a series of songs for tenor and organ, the number, order and texts of which vary between the original manuscripts and the various editions. The organ version on the present disc is the first recording to follow the original song text, according to Sibelius’s manuscripts. This CD also includes an arrangement of the score, made by Jaakko Kuusisto at the request of the Finnish Freemasons for a special celebration concert held at the Sibelius Hall in Lahti.