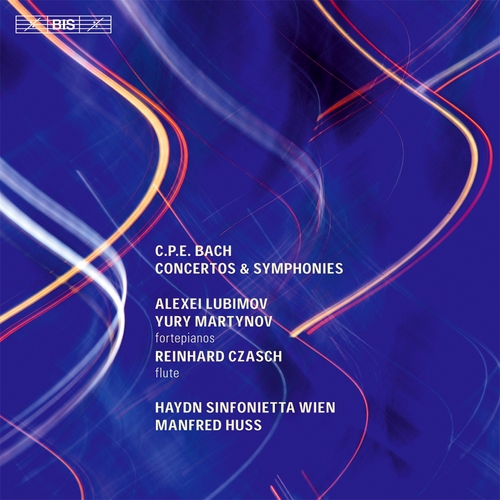 C.P.E. Bach:
Concerto in F major for two keyboards
Flute Concerto in A minor
Hamburg Symphony No.1 in D major and No.4 in G major
J.C. Bach:
Symphony for Double Orchestra Op.18/1
It is to be hoped that the tricentennial of the birth of Carl Philipp Emanuel Bach will lead to a greater and more widespread interest in this ever-innovative composer. Once valued even higher than his father, Johann Sebastian, and revered by Haydn, Mozart (‘He is the father of us all…’) and Beethoven, his music has since become the preserve of musicologists and specialists. Highly regarded for his endeavours of bringing early and unknown music by Haydn to light, Manfred Huss has also been a long-time champion of C.P.E. Bach, and the present disc combines recordings that he made with his Haydn Sinfonietta Wien in 2005 and 2006. Awarded the prestigious Pasticcio-Preis at the time of their original release, these concertos and symphonies were composed over a period of 35 years, with the Double Concerto in F major – here performed by Alexei Lubimov and Yury Martynov on fortepianos rather than the usual harpsichords – from 1740 being the earliest work. Written in a gallant style, it also contains traces of late baroque which some ten years later had all but disappeared in the A minor Flute Concerto. With the two Hamburg Symphonies from 1775, we and C.P.E. are firmly on the road to Classicism by way of ‘Sturm und Drang’. Each of them with a duration of some ten minutes, both works are surprisingly concise, but also highly effective, owing to their concentration of expression and rapid changes of character. The disc closes with a ‘bonus’ – a previously unreleased recording of C.P.E.’s younger brother Johann Christian’s Symphony for Double Orchestra in E flat major. Composed in London around the same time as the Hamburg Symphonies, it forms a perfect contrast to those works, demonstrating that family ties and closeness in time may count for less than one might have thought.