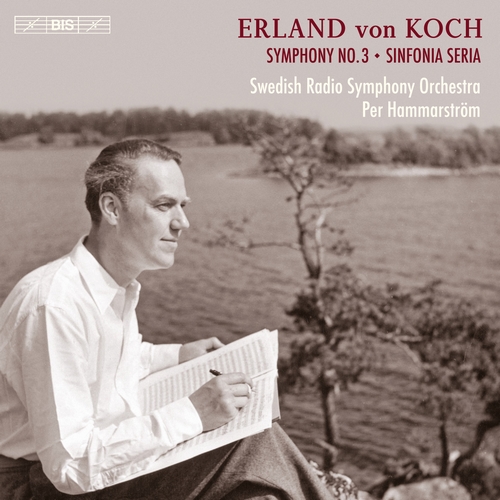 Symphony No.3, Op.38
Sinfonia seria (Symphony No.4), Op.51
Impulsi (1964)
Nordiskt capriccio, Op.26
Along with Lars-Erik Larsson and Dag Wirén, Erland von Koch was part of a generation of composers who all made their débuts during the 1930s. Active until the end of a very long life (1910–2009), von Koch became one of Sweden’s best loved composers, himself describing his artistic goals as follows: ‘I aim for a simple, clear, melodic style, often with elements of folk tone and with a definite rhythmic profile... The older you get, the more aware you become of the importance of melody.’ One of von Koch’s most frequently performed orchestral works is Nordiskt capriccio, which was inspired by a folk tune from Dalecarlia, and which forms the festive finale on the present disc. The compositions which precede it here are less well known, however – Impulsi (the first part of a triptych later completed with the works Echi and Ritmi) was taken up by conductors such as Sergiu Comis­siona and Walter Weller, but the two symphonies appear for the first time on disc. Especially in Symphony No.3, influences from Bartók and Hindemith can be detected – composed in 1948, it is a work which in its thematic material contrasts defiance with lyricism and, finally, a feeling of release. Sinfonia seria, von Koch’s fourth work in the genre, followed a few years later, undergoing a final revision in 1962. As indicated by the title, the underlying mood of the work is grave and bittersweet – possibly this is reflected in the composer’s own words regarding the thankless task of writing symphonies: ‘They are rarely played – especially if they are Swedish – and it takes a long time before they are “discovered” and accepted, if indeed they ever are.’ With this disc, the Swedish Radio Symphony Orchestra and conductor Per Hammarström are making their case for a hoped-for, and long overdue ‘discovery’ of Erland von Koch’s symphonies.
World premiere recordings