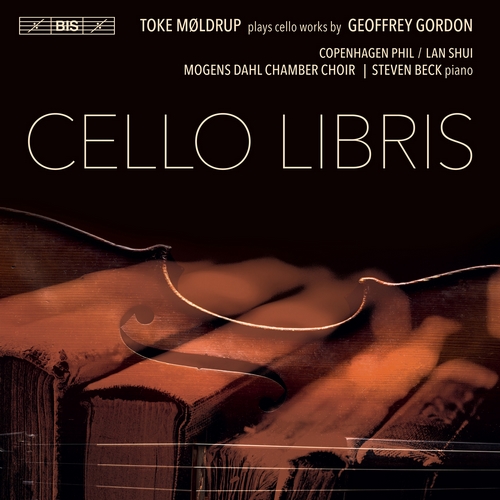 Concerto for Cello and Orchestra after Thomas Mann’s Doktor Faustus
Fathoms for cello and piano - Five Impressions of Shakespeare’s The Tempest (with Prelude)
Ode to a Nightingale for mixed choir and solo cello after the poem by John Keats
Dividing his time between the United States and the United Kingdom, the composer Geoffrey Gordon writes music that has been described as ‘darkly seductive’ (New York Times), ‘richly satisfying’ (BBC Music Magazine) and ‘iridescent and fierce’ (The Chicago Tribune). The present, amply-filled disc brings together three of his recent works, all composed between 2013 and 2018 for the soloist recording them here, the Danish cellist Toke Moldrup. In several of his works, Gordon takes his inspiration from other art forms – sculptures by Giacometti, a self portrait by Warhol, a children’s picture book by Maurice Sendak.

The works gathered here are inspired by or reactions to three literary masterworks. The ‘creative blueprint’ for the opening work, the Cello Concerto, is the novel Doktor Faustus by Thomas Mann. Organized into a Prologue and Seven Episodes, the work traces the progress of Mann’s protagonist Adrian Leverkühn from innocence to madness, with the cello both embodying and (occasionally) commenting on the proceedings. For this recording, Moldrup receives the support of the Copenhagen Phil and conductor Lan Shui. In the score of Fathoms, Gordon’s sonata for cello and piano, each of the five movements is headed with a quotation from Shakespeare’s The Tempest which sets the scene for the musical impression that follows. Here Moldrup is joined by the American pianist Steven Beck. The amply-filled disc closes with Ode to a Nightingale, with the words of John Keat’s immortal poem heard from the Mogens Dahl Chamber Choir, and given emphasis by Toke Moldrup’s obbligato cello.
Recording: May 2018 at the Concert Hall of the Royal Danish Academy of Music, Copenhagen. Instrumentarium: Cello - David Tecchler, Rome 1697, courtesy of the Augustinus Foundation; Piano - Steinway D