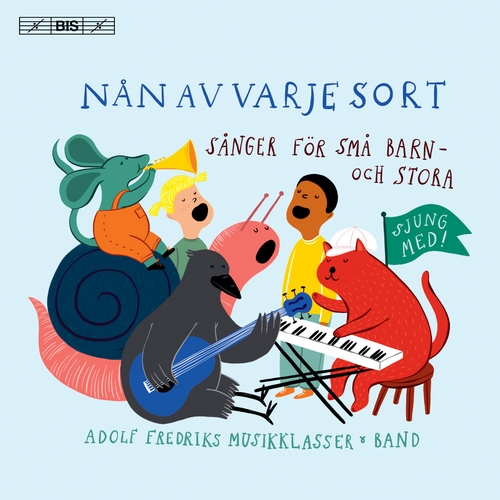 Bis - BIS 2564
Kompozytor
Bengt Wilhelm Hallberg (1824-1883)
Alice Tegnér (1864-1943)
Georg Riedel (ur. 1934)
Wykonawcy
Adolf Fredriks Musikklasser Farsta
Ninnis Vardagsrum / Maria Goundorina, Anna Cederberg-Orreteg, Marcus Josephson
Contemporary and traditional Swedish children’s songs, including:
Min lilla kraksang
En kulen natt
Krokodilen i bilen
Det finns nan av varje sort
Elefantsangen
Vad det är bra att jag har dig
Trollmors vaggsang
Byssan lull
It is sometimes said that there are more people in Sweden who sing in choirs than play soccer. Young or old, Swedes do love to sing, and not just at Midsummer celebrations or Christmas concerts – more half a million Swedes turn up to choir practice every week. The Swedish tradition of nursery rhymes goes way back, but during the 1960s and 70s, the scene was enriched further, helped by children’s programmes on radio and TV. Parents, grandparents and teachers moved on from singing to kids to singing with them, a change of perspective which naturally influenced the new songs being written.

Many existing recordings of these songs are made by adults, singing in registers that make it difficult for children to sing along. With decades of experience in working with children, choir conductors at the Adolf Fredriks Musikklasser in Stockholm saw the need for one that would encourage kids to sing. They decided to record an album of some very popular children’s songs with their pupils and a five-piece pop band. The result is a disc of children’s songs sounding just the way they should – one that will provide hours of fun for kids of all sizes!
Recording: 25 - 26 September 2020, Farsta grundskolas aula.