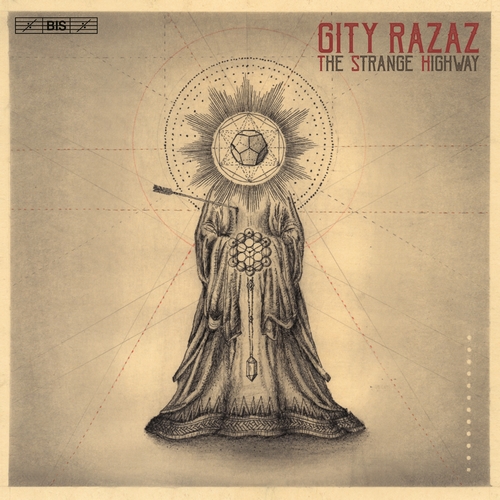 The Strange Highway
Duo
Legend of Sigh
Spellbound
Metamorphosis of Narcissus
Gity Razaz was born in Tehran, where she spent her formative years before moving to the United States in 2002. Razaz’s identity as an immigrant is integral to her artistic work, in terms both of the subject matter that attracts her and the musical structures she employs. The relationship between the grounded and the ephemeral inhabits much of her music: her choice of titles reveals a poetic sensibility, but her music is never purely cerebral. Instead it is often anchored by the visceral, as with the punchy rhythms and earthy colours of The Strange Highway for cello octet. That piece, which has given name to the album, takes its inspiration from a poem by the Chilean author Roberto Bolano.

Two other works on the disc also have extra-musical roots: Legend of Sigh is a retelling in music of an Azerbaijani folktale while Metamorphosis of Narcissus was inspired by the famous painting by Salvador Dalí. In both these works Razaz embraces electro-acoustic techniques as a means of enhancing her palette. The five works on the disc were composed between 2007 and 2020, with the earliest piece being Duo for violin and piano. The latest work is Spellbound, a solo for viola inspired by the mournful sound quality of Persian instruments such as the ney and kamanche.
Recording: Live recording from 3rd Amsterdam Cello Biennale, 11th November 2010 at the Muziekgebouw aan ’t IJ, Amsterdam, the Netherlands (The Strange Highway); 28th January 2021 at Oberlin Conservatory, Oberlin, USA (Duo).