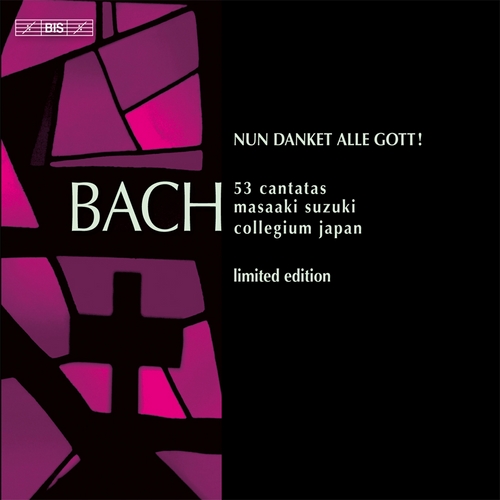 J.S. Bach: 53 cantatas composed in Leipzig between 1726 and 1748 Originally released 2008-2013 as single Super Audio CDs Includes the original booklets with notes in English, German and French, and cantata texts in German and English.

In 2010, celebrating the first 15 years of the monumental project undertaken by Bach Collegium Japan and Masaaki Suzuki to record all of Bach’s church cantatas, BIS released a limited edition of the first forty discs in four boxed sets. The 55th and final volume of the BCJ series having been released in November 2013, and in response to numerous requests by collectors, we now follow this up with a fifth and final box, consisting of the remaining 15 volumes, in CD versions (as opposed to the original SACDs). As devised by Masaaki Suzuki in 1995, the series started with the cantatas composed in Mühlhausen 1707-08 and has proceeded largely chronologically. The present box set is made up of the final extant 53 cantatas from Leipzig (1726-1748), and include such cantatas as Ich will den Kreuzstab gerne tragen (BWV 56), Ich habe genung (BWV 82) and perhaps the most famous of them all: Wachet auf ruft uns die Stimme (BWV 140). An opportunity for collectors to complete their sets, thus, but also for the curious to acquire a large selection of Bach’s mature masterpieces in the cantata genre, in performances which have received worldwide acclaim for their consistent excellence and superb sound (‘A set for the ages’, Fanfare), and for a quality best described by a reviewer in International Record Review: ‘With Suzuki you can hear Bach’s heart beat …’