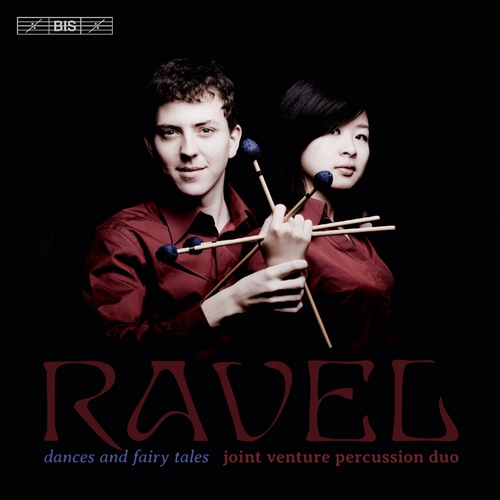 Le Tombeau de Couperin
Ma mere l’Oye, 5 pieces enfantines
Pavane pour une infante défunte
Rachel Xi Zhang and Laurent Warnier, the two musicians forming Joint Venture Percussion Duo, met while they were still students at the Conservatorium van Amsterdam. Sharing a love for the music by Maurice Ravel and regretting that the composer never wrote for percussion instruments, they decided to make an arrangement of the Prélude from his last work for solo piano, Le Tombeau de Couperin. It proved an exhilarating experience as well as a fruitful exercise, bringing the duo closer together as the players aimed at creating a single inseparable sound in certain passages, and in others at producing a rainbow of timbres, inspired by Ravel’s own shimmering orchestral scores. Arrangements of the entire work followed, with the prelude and a toccata framing a series of stylized dances: the Forlane with its dotted rhythms and piquant dissonances, the robust, bucolic Rigaudon and the Minuet, as well as a three-part fugue. The duo went on to arrange Ravel’s fairy tales in Ma mere l’Oye, originally written for piano four hands but later expanded into a ballet score orchestrated by the composer himself. Joint Venture Percussion Duo closes their first CD with their arrangement of what has become one of Ravel’s best-known compositions, the nobly melancholic Pavane pour une infante défunte.