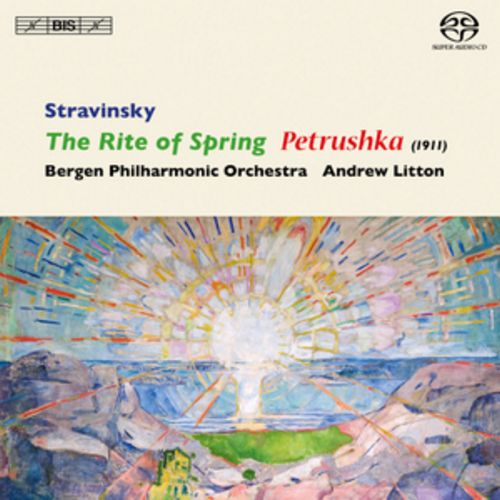 Petrouchka
Le Sacre du printemps
During the 1910’s, at a time when late-romanticism had been taken about as far as possible, the collaboration between Igor Stravinsky and the ballet impressario Sergei Diaghilev had a huge influence on the development of music. Performed by Diaghilev's company Les Ballets Russes, their first joint effort, The Firebird, was a great success in Paris in 1910, and within the space of just a couple of years two further landmarks of twentieth-century music followed: Pétrouchka and Le Sacre du printemps. Stravinsky's clear-cut textures, strong primary colours and almost percussive treatment of the orchestra staked out a route later explored by many of his colleagues. Particularly striking in the case of Pétrouchka was the extensive use of scraps of folk song and street music, treated with extreme refinement and often biting irony – the character of Petrushka, a puppet come to life, was described by Stravinsky as ‘the immortal and unhappy hero of every fair-ground in all countries’. On the present recording the original 1911 version is used, giving an even more immediate and exciting effect. As for The Rite of Spring, the scandal at its 1913 premiere has become legendary – a scandal probably caused as much by Nijinsky’s choreography as by Stravinsky’s score. But even today, the music offers an extremely powerful experience, above all through its rhythmic qualities. Static rhythms, repeated for long stretches, generate enormous latent energy and are contrasted with irregular rhythms that change at bewildering speed. Both scores belong to the pinnacles of 20th-century orchestral music, and are here performed by the Bergen Philharmonic Orchestra conducted by its music director Andrew Litton. Most recently this team have released a highly praised cycle of Mendelssohn’s symphonies, but their Russian credentials are also impeccable, with their recording of Prokofiev’s Romeo and Juliet Suites being described as ‘glittering, colourful, spirited … and with a striking attention to detail’ on the website Klassik-Heute.