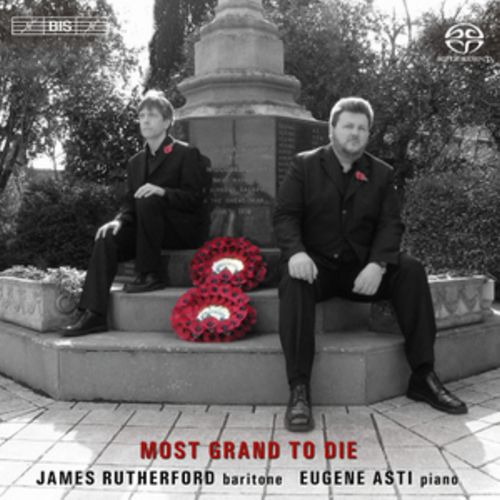 George Butterworth:
Bredon Hill and other songs
Six Songs from ‘A Shropshire Lad’

Ivor Gurney:
In Flanders, Severn Meadows, Even such is time, By a bierside, The Twa Corbies (Border Ballad), Sleep

Ralph Vaughan Williams:
Songs of Travel
The First World War marked an entire generation of composers, both in England and on the continent. Of the three composers represented here, George Butterworth was killed on the Somme in 1916, while Ralph Vaughan Williams, who damaged his hearing while commanding an artillery battery, survived, but with memories that would colour many of his post-war masterpieces. Ivor Gurney, finally, also survived, but with a seriously aggravated bipolar disorder that would lead to his spending the last 15 years of his life in a mental hospital. While Butterworth composed his two song cycles some five years before the outbreak of the war, the collection of poems that he chose his texts from – A. E. Housman's A Shropshire Lad – was striking a resonant contemporary note with its numerous poems dealing with ill-starred young men facing death. Even earlier, in 1904, Vaughan Williams had turned to poems by Robert Louis Stevenson, for his Songs of Travel, a set of nine songs in which the wanderer-narrator philosophically accepts the mixture of joys and sorrows that are offered to him along the road. Gurney – the youngest of the three composers – was also a poet, and in Severn Meadows expressed his longing for home in both text and music. Along with In Flanders, Even such is time and By a bierside – ending with the words of the album’s title – Severn Meadows was composed during Gurney’s time in the trenches, before exposure to poison gas in September 1917 caused him to be returned to England. Interpreting these highly expressive songs is James Rutherford, who has risen to fame as a Wagnerian singer, with Hans Sachs (Die Meistersinger) at Bayreuth among his credentials, but who reserves a special place in his repertoire for English 20th-century song. On his first recording for BIS he appears with his regular collaborator Eugene Asti at the piano.