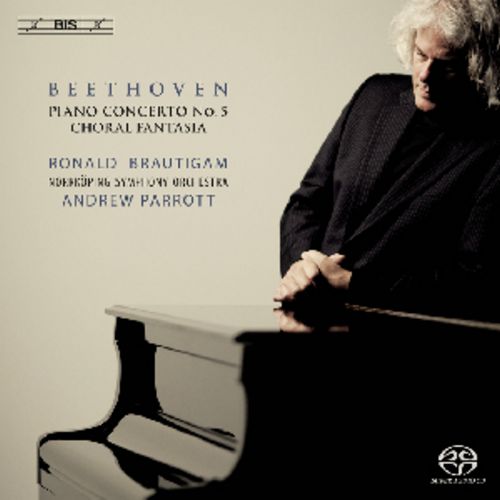 Piano Concerto No.5 in E flat major, Op.73, ‘Emperor’
Choral Fantasia in C minor, Op.80
For the final instalment of his survey of Beethoven’s works for piano and orchestra, Ronald Brautigam has saved ‘the final crowning glory of his concerto output’, as Beethoven specialist Barry Cooper describes the Fifth Piano Concerto in his liner notes. The work has become known as the Emperor Concerto, as it shares its key (E flat major) as well as a certain sense of power and grandeur with the Third Symphony, the ‘Eroica’. It is coupled on this disc with the Choral Fantasia – an intriguing work scored for piano, orchestra and chorus with vocal soloists. The explanation for this unusual combination is that Beethoven wanted to provide a fitting finale for one of his mammoth concerts in Vienna. The concert, which took place on 22 December 1808, included performances of the Fifth and Sixth Symphonies as well as the Fourth Piano Concerto and two movements from the Mass in C major; the Choral Fantasia thus brought all of the evening’s performers on stage once more before the end of the concert. The individual discs in Ronald Brautigam’s series have received numerous distinctions, including a MIDEM Classical Award in 2010, and his performances have been weighed against classic recordings by legendary pianists. ‘Brautigam's account [of Concerto No. 1] compares with Richter's for sparkle, with Pollini's for cleverness, and with Michelangeli's for liveliness... The performance of Beethoven's Third Concerto that follows is even better’, wrote the reviewer on website All Music.com, while the one in Gramophone deemed that the recording of the Second Concerto was ‘almost as good as Serkin's account with Ormandy, which is saying something!’ In the review in International Record Review of the penultimate volume, finally, the series so far was summed up as follows: ‘For my money, Brautigam and Parrott are setting a new bench-mark, and I eagerly await the final instalment.' It is of course a great pleasure to be able to announce the release of that longed-for disc, with Ronald Brautigam, the Norrköping Symphony Orchestra and Andrew Parrott in their usual top form, and with the brief but crucial appearance of the eminent Eric Ericson Chamber Choir in the Choral Fantasia.