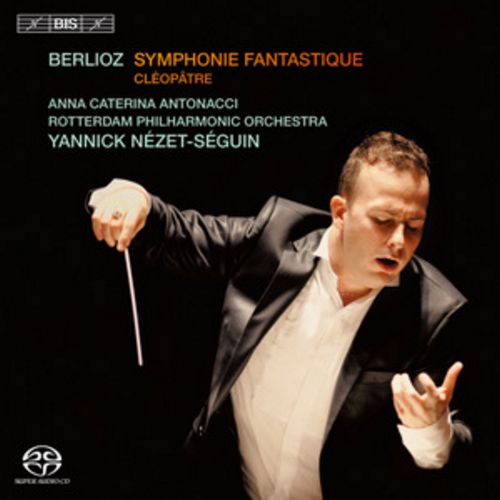 Cléopâtre, scene lyrique (1829)
In a very short time, Yannick Nézet-Séguin has become one of the most sought-after young conductors in the world, popular with orchestras and audiences alike. Recently named as Music Director Designate of the Philadelphia Orchestra, he succeeded Valery Gergiev as Music Director of the Rotterdam Philharmonic Orchestra in 2008, and has since then taken the orchestra on acclaimed tours to Asia, the USA and his native Canada, as well as making a high-profile appearance during the BBC Proms in London and undertaking a residency at Théâtre des Champs-Elysées in Paris. For the first of four projected discs with BIS, Nézet-Séguin and his Rotterdam players have recorded Hector Berlioz’ masterpiece Symphonie fantastique, in a full-blooded and luxurious performance which at the same time respects the work’s classical proportions: the conductor himself has described the work as being the last Classical symphony as well as the first Romantic one. The first performance of the largely auto-biographical Symphonie (originally entitled ‘An Episode in the Life of an Artist’) formed the composer’s great break-through, and was applauded by luminaries such as Franz Liszt. In his Memoirs Berlioz relates how the closing movements, March to the Scaffold and the Witches’ Sabbath, in particular caused a sensation. The work is here followed by the ‘lyrical scene’ Cléopâtre (often referred to as La Mort de Cléopâtre), composed shortly before as Berlioz’ entry in the competition for the prestigious Prix de Rome. The dramatic potential of the text – Cleopatra’s farewell to the world before committing suicide by snakebite – led the young composer to write music of the highest possible drama, which thoroughly scared off the academicians of the Prix de Rome-jury from awarding it a prize. Performing – or rather embodying – the part of Cleopatra is the electrifying soprano Anna Caterina Antonacci, in one of her rare appearances on disc.