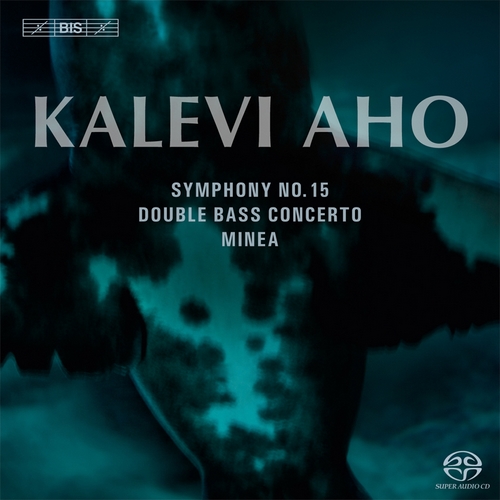 Minea (Concertante Music for Orchestra)
Concerto for Double Bass and Orchestra
Symphony No.15 (201
'My apotheosis of the dance' is how Kalevi Aho describes his Symphony No.15. With two dance movements and rhythm a central element, the score calls for numerous percussion instruments, including non-Western ones such as bongos, darbuka, djembe and the riqq, an Arabian tambourine. The composer's interest in non-Western music and instruments has been evident in several recent works, such as his Symphony No. 14 (recorded on BIS-1686) and Oboe Concerto (BIS-1876). It also played an important part during the creation of Minea, composed as a concert opener for the Minnesota Orchestra on the initiative of Osmo Vänskä, who also conducts the work here. Mentioning Indian ragas, Japanese shakuhachi music, Arabian rhythms and Eastern scales, Aho explains that his aim has been to expand his own sound world with elements of other classical music cultures, and to try to view the Western musical tradition from other perspectives. Minea and Symphony No.15 frame the composer's Concerto for Double Bass, composed in 2005 for Eero Munter. In order to be able to write idiomatically for the instrument, the composer borrowed a double bass, and as work on the piece progressed, he actually grew proficient enough to try out most of the solo part – albeit at a very slow tempo, as he freely admits! The concerto offers the opportunity to hear the solo instrument in highly unusual contexts, for instance in the two accompanied cadenzas – the first a pizzicato duet with the harp, and the second a trio with two percussionists. Throughout the disc we hear the Lahti Symphony Orchestra, which for more than 20 years has made a remarkable commitment to the composer, performing and recording a large number of his works. The orchestra is conducted by Jaakko Kuusisto and Dima Slobodeniouk, as well as by the above-mentioned Osmo Vänskä.