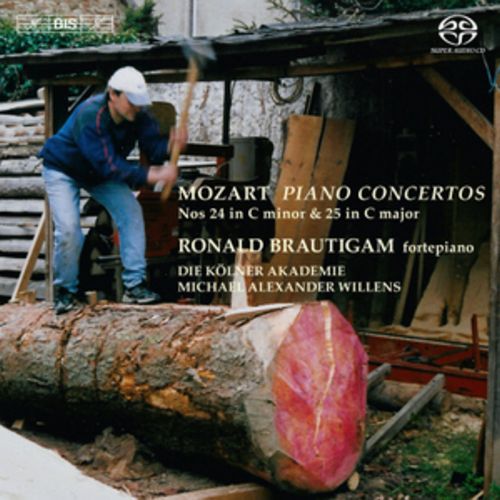 Piano Concerto No.24 in C minor, K 491
Piano Concerto No.25 in C major, K 503
Composed in 1786, the Piano Concertos Nos 24 in C minor and25 in C major are regarded as two of Mozart's finest achievements in the genre. Both are large-scale works, with durations of more than 25 minutes each – the C major concerto is in fact one of the most expansive of all classical piano concertos, rivalling Beethoven’s fifth concerto. Their grandeur immediately made them popular fare in the concert hall – Mendelssohn, for instance, had No.24 in his repertoire through the 1820s and 1830s – and new recordings appear regularly. It is nevertheless relatively rare to hear them performed on original instruments and with orchestral forces corresponding to what Mozart himself would have been familiar with. On his copy of a fortepiano from 1795 and with the congenial support of Die Kölner Akademie under Michael Alexander Willens, Ronald Brautigam therefore offers us a welcome opportunity to experience these masterpieces as they may have sounded when Mozart himself performed them. The first release in the team’s traversal of Mozart’s concertos, which included the ‘Jeunehomme’ Concerto No.9, was released in 2010 and caused the reviewer in International Record Review to describe the soloist as ‘an absolutely instinctive Mozartian, with… melodic playing of consummate beauty’, going on to congratulate him on finding the ‘ideal partners’ for the project.