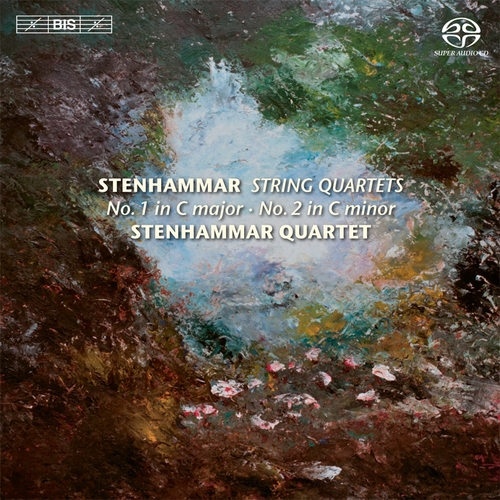 String Quartet No.1 in C major, Op.2 (1894)
String Quartet No.2 in C minor, Op.14 (1896)
Between 1894 and 1916 Wilhelm Stenhammar composed a total of seven string quartets, of which one (F minor, 1897) was withdrawn immediately after its first performance. In Scandinavian music of its time, this series of quartets is unique both in its consistency and in its musical aspirations. Taking its name from the composer, the Stenhammar Quartet with this recording signs off on the first ever complete traversal of the cycle on CD. (The only other previous cycle was recorded in the 1980's by three different ensembles, and did not include the then still unpublished F minor quartet.) The present series has been greeted with great international interest and critical acclaim – both for performances described as 'exceptional' (The Guardian) and for the quality of the music itself: 'there is no doubt that Stenhammar belongs to the unknown great masters of the string quartet genre'(Klassik-Heute.de). On this final disc, the Stenhammar Quartet performs the Swedish composer’s first two attempts in the genre. The C Major Quartet was composed only a few months after Stenhammar had made a sensational breakthrough with his Op.1, the piano concerto in B flat minor which he himself had premiered as soloist with the orchestra of the Royal Opera in Stockholm. But already two years earlier he had begun a close collaboration with the Aulin String Quartet, and it was for this ensemble that he composed his first quartet, as well as the following four. Like the piano concerto, the C major quartet is influenced by Brahms, whose quartets Stenhammar had been studying, and may to some extent be regarded as a highly promising apprentice work in the genre. In contrast, the String Quartet No.2 in C minor, written just two years later, represents a more independent approach, with a highly imaginative treatment of themes and motifs.