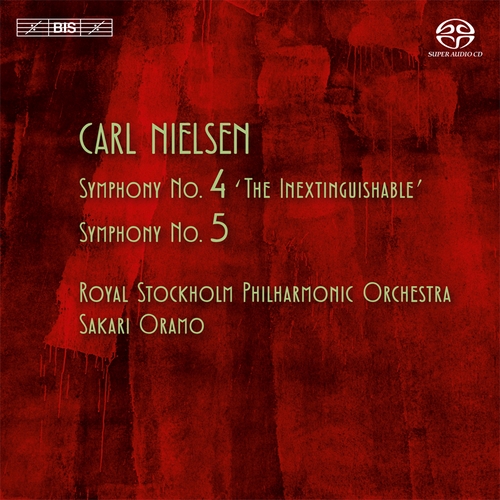 Symphony No.4, Op.29, ”Det uudslukkelige”
‘The Inextinguishable’ Symphony No.5, Op.50
In 1962, when Leonard Bernstein chose to record Carl Nielsen’s Fifth Symphony, this provided the composer with a wider international breakthrough some thirty years after his death. The work has since been hailed as one of the greatest symphonies of the twentieth century, but at its first performances during the early 1920’s audiences were less enthusiastic, finding it puzzling and difficult to understand. Although unwilling to provide an explanation of the symphony, Nielsen had however inscribed a kind of motto, ‘Dark, resting forces – Awakened forces’, at the end of his draft score and later wrote that it was ‘something very primitive I wanted to express: the division of dark and light, the battle between evil and good.’ Some eight years earlier, as he began work on his Symphony No.4, similar thoughts had been stirring in the composer. In 1914, with the First World War about to engulf Europe, he had written to his wife about a work with which he hoped to express ‘what we understand by the life-urge’. Giving it the title ‘The Inextinguishable’ at its publication, Nielsen later explained his intentions further: ‘If the whole world was destroyed, Nature would once again begin to beget new life and push forward with the strong and fine forces that are to be found in the very stuff of existence… These “inextinguishable” forces are what I have tried to represent.’ These two central works in Nielsen’s production have now been selected for the first instalment of a complete Nielsen cycle by Sakari Oramo and his Royal Stockholm Philharmonic Orchestra. Having enjoyed a close collaboration since 2008, this team has become ever more fine-tuned, as demonstrated on their previous BIS release, a performance of Edward Elgar’s mighty Second Symphony which was praised by the reviewer in Gramophone for ‘playing of conspicuous finesse and commendable ardour’ in an ‘abundantly characterful, cannily paced and deeply sincere traversal’.