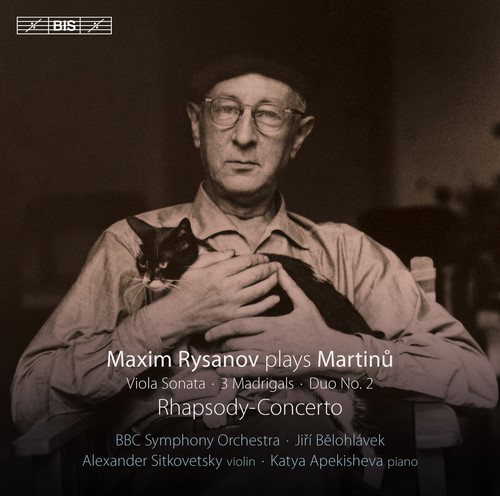 Rhapsody-Concerto for viola and orchestra, H 337 (1952)
Three Madrigals for violin and viola (Duo No.1), H 313 (1947)
Duo No.2 for violin and viola, H 331 (1950)
Sonata for Viola and Piano, H 355 (1955)
In 1906, when the people of the Czech town of Polička raised funds to send the local talent Bohuslav Martinů to the Prague Conservatoire, it was with the hope that he would become a violin virtuoso. Martinů’s real passion lay in composition, however, and within a few years his failure to apply himself to his studies led to his expulsion from the Conservatoire. Remaining in Prague he was a regular in the second violin section of the Czech Philharmonic, while throwing himself into composition. In 1923 Martinů moved to Paris, where he received tuition from Albert Roussel, and this marked the end of his career as a violinist. Whether he ever tried his hand at the viola isn't known, but he clearly enjoyed its distinctive sound: several early orchestral scores feature prominent viola solos, and later in his career, after a further move to the U.S.A., Martinů were to compose four works which all belong to the central 20th century repertoire for the instrument. Maxim Rysanov, one of today's leading viola players, has gathered these works on this disc, opening with the Rhapsody-Concerto from 1952. In this lyrical two-movement work, characterized by sustained legato writing, sudden changes of mood and texture and a vivid style of orchestration, Rysanov is supported by the BBC Symphony Orchestra, conducted by the eminent Martinů expert Jiří Bělohlávek. The two Duos for violin and viola which follow are slightly earlier (from 1947 and 1950, respectively) and were written with the husband-and-wife team Joseph and Lillian Fuchs in mind. Here the young Russian violinist Alexander Sitkovetsky joins Rysanov, in two scores where exacting technical demands bring the reward of an astonishing richness in sounds and variety from such a sparse instrumentation. Maxim Rysanov closes the disc in the company of the pianist Katya Apekisheva, performing the Viola Sonata of 1955 – like the Rhapsody-Concerto in two movements, with a tough, passionate mood that often recalls the composer's better-known cello sonatas.