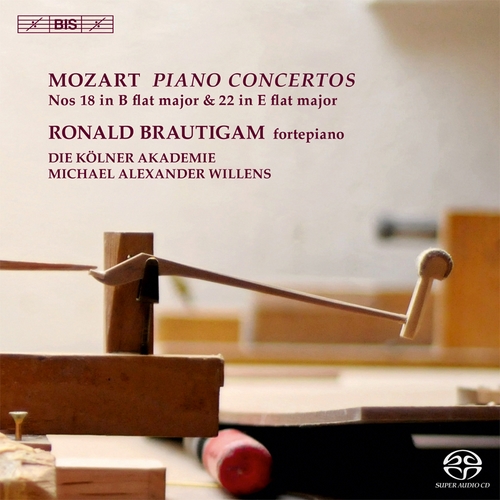 Piano Concerto No.18 in B flat major, K 456
Piano Concerto No.22 in E flat major, K 482
The sixth disc in this highly acclaimed series combine two works in which Mozart's powers as an orchestrator come to the fore. Concerto No. 18 in B flat major, K 456, is sometimes referred to as one of the composer’s ‘military concertos’ on the basis of the march-like main theme of the first movement. But more striking is the variety of ways that Mozart employs the various groups of instruments: strings, wind instruments and, of course, the piano. This aspect certainly didn’t pass unnoticed by a listener as initiated as Mozart’s father Leopold: in a letter to his daughter Nannerl he described how his enjoyment of the orchestral interplay had brought tears to his eyes. The performance that Leopold was referring to was by Mozart himself at a concert in Vienna in 1785, but the work is believed to have been written for the blind virtuoso Maria Theresia von Paradis to play on a concert trip to Paris, and the demanding piano part leaves us in no doubt about her abilities as a pianist. Concerto No. 22 in E flat major, on the other hand, is one that Mozart wrote primarily for his own use, completing it on 16th December 1785, and performing it later the same month. It is the first of only three piano concertos in which he uses clarinets, to particular effect in the expressive Andantino cantabile episode of the otherwise ebullient Finale. The orchestra is on the whole unusually large, with trumpets and timpani, and horn parts which are uncommonly independent and important to the musical argument.