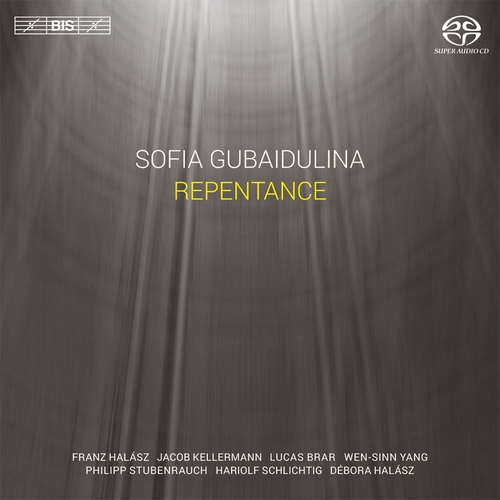 Repentance (2008) for cello, three guitars and double bass
Serenade (1960) for solo guitar
Piano Sonata (1965)
Sotto voce (2010/13) for viola, double bass and two guitars (World Premiere Recording)
Within the output of Sofia Gubaidulina, solo and chamber music occupies a position of prominence; she has written more than eighty such works. One of the earliest is the brief – and not really typical – Serenade for solo guitar from 1960, composed as a commission from a Moscow publishing house for inclusion in a collection of guitar compositions. The composer was asked to write a piece not overly difficult or progressive, and has later described the result as ‘music for pleasure’. Demonstrating a particular closeness to the guitar, Gubaidulina’s later writing for it has exploited its sound spectrum in previously unimagined ways. Two further works involving the guitar are included here, with Repentance from 2008 being a reworking of an earlier work, just as its title is a translation of the original’s Italian one, Ravvedimento. Her latest work involving the guitar, and also the latest on this disc (and a world premiere recording) is Sotto voce for viola, double bass and two guitars. About this unusual combination, Gubaidulina has remarked: ‘It fascinated me on account of its dark colour and its potential for contrast between a muted, almost whispered sotto voce sound and that particular sort of expressivity that low-pitched instruments possess’. Each with a duration of more than 20 minutes, these two works frame the equally substantial but much earlier Piano Sonata. Looking back at her youth, the composer has described the piano in her family home as ‘the only light’ in ‘a fairly grey and uninteresting existence’. Striking features of the sonata include borrowings from jazz and the twelve-tone row which underpins all its three movements – a nod towards the dodecaphony through which Gubaidulina asserted her place in the Russian musical avant-garde at an early stage. This varied and fascinating journey into the world of Sofia Gubaidulina’s chamber music is given us by a Munich-based group of eminent musicians.