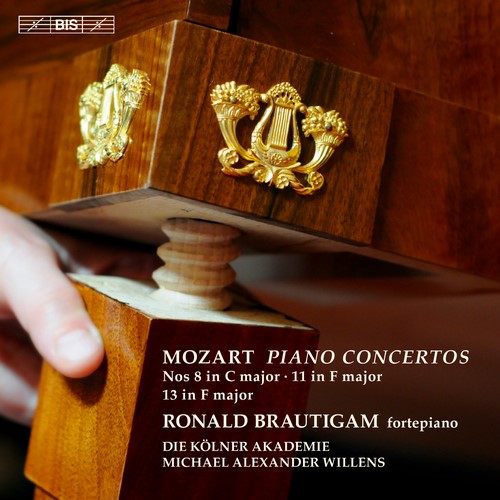 Piano Concerto No.8 in C major, K 246
Piano Concerto No.11 in F major, K 413
Piano Concerto No.13 in C major, K 415
On this ninth instalment in Ronald Brautigam’s series of the complete piano concertos by Wolfgang Amadeus Mozart, the programme consists of three works composed in 1776 and in 1782-83. As on previous discs, Brautigam – whose ‘muscular yet sensitively nuanced command of Mozartian discourse’ has been described by BBC Music Magazine as central to the series – is supported by Die Kölner Akademie under Michael Alexander Willens, in a partnership that for each new recording becomes ever more intuitive and close-knit. The opening work on this instalment is the C major concerto, K 415, which was first performed on 23rd March 1783 in the presence of Emperor Joseph II. Mozart doubtless intended for the work to make a spectacular impression, and this may have been his reason for adding parts for trumpets and timpani which were not included in the first published edition of the concerto. K 415 was composed in conjunction with the Concerto No.11 in F major, K 413, which in contrast is a more intimate creation. Especially in its Larghetto middle movement, Mozart achieves some of his most memorable writing, with the various textures of the orchestra providing a cushion of sound for a delicious cantabile aria for the piano – a model that was to become almost a trademark of his later concerto slow movements. The disc closes with Concerto No.8 in C major, K 246, composed some six years earlier. Mozart wrote it for Countess Antonia Lützow, one of his father’s pupils, and in terms of technical difficulty, it is among the least demanding of his piano concertos – which nevertheless didn’t stop Mozart from performing it himself on several occasion