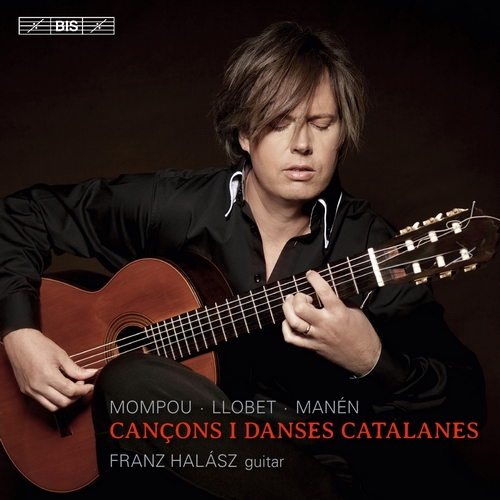 Joan Manén:
Fantasia-Sonata per a guitarra
Catalonia is among the most distinctive of the various Spanish regions, partly because of the Catalan language and its rich literary tradition. Catalan music and dance are also unique, however, and have little in common with stereotypically ’Spanish’ folklore. In the latter half of the 1800s there was a resurgence of Catalan culture, and during the period that followed Barcelona produced many outstanding performers and composers, including Enric (Enrique) Granados, Ricard (Ricardo) Vines, Alicia de Larrocha and Pau (Pablo) Casals. On this disc of Catalan ’songs and dances’, Franz Halász presents us with three other names worthy of inclusion on this list: Frederic (Federico) Mompou, Miquel (Miguel) Llobet and Joan (Juan) Manén. Mompou is certainly best known for his piano music, and the Cançó i dansa No.10 was actually composed for that instrument. The composer made the transcription performed here himself, however, suggesting that he may well have had that instrument in mind when he writing for the piano. Both Cançó i dansa No.13, based on two traditional Catalan songs, and the Suite Compostelana are original guitar works. Some fifteen years years older than Mompou, Llobet was a guitarist who toured internationally, but he also composed. His arrangements of Catalan folk songs are among his most enduring contributions to the guitar repertoire. These tunes were well known to the Barcelona public in Llobet’s day, and arrangements of songs like La filadora (The Spinner Woman), Cançó del lladre (Song of the Thief) and La Nit de Nadal (Christmas Eve) received an enthusiastic reception. Closing the programme is the Fantasia-Sonata by Joan Manén, a musical prodigy who went on to an international career as a virtuoso violinist. Manén was also a versatile composer, who with this piece, dedicated to Andrés Segovia, created a fine contribution to the literature for guitar.