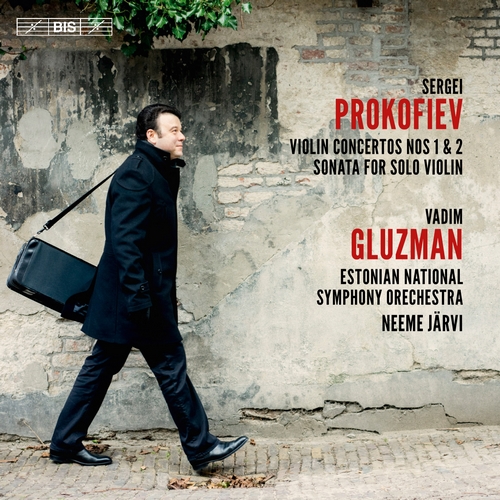 Violin Concerto No.1 in D major, Op.19
Violin Concerto No.2 in G minor, Op.63
Sonata in D major for solo violin, Op.115
Nathan Milstein once described Sergei Prokofiev’s first violin concerto as: ‘indeed one of the best modern violin concertos… a brilliant piece, perhaps the finest of all Prokofiev’s works’, while the second concerto was taken up by violinists such as David Oistrakh and Jascha Heifetz. Here the two works are interpreted by the Ukrainian-born Vadim Gluzman, who as many critics have remarked is firmly based in the glorious tradition of these and other virtuosos of the 19th and 20th centuries. His several discs for BIS have included concertos by Tchaikovsky and Bruch as well as by Gubaidulina and Barber, earning him accolades such as Diapason d’or de l’année, and numerous recommendations by magazines and websites including The Strad, BBC Music Magazine, Fono Forum and ClassicsToday.com. On the present disc, Gluzman is supported by the eminent Estonian National Symphony Orchestra conducted by Neeme Järvi, with impressive credentials in Prokofiev’s music. Gluzman rounds off the programme with Prokofiev’s only solo work for the violin, the Sonata in D major, Op.115 – one of the composer’s less familiar compositions for the instrument. Strictly speaking it is a sonata for several violins: Prokofiev wrote the piece in 1947 to be played in unison by violin students. Despite its pedagogical purpose, the sonata is far more than just a technical exercise, however, presenting an overwhelming richness of ideas and emotions within a short time-frame.