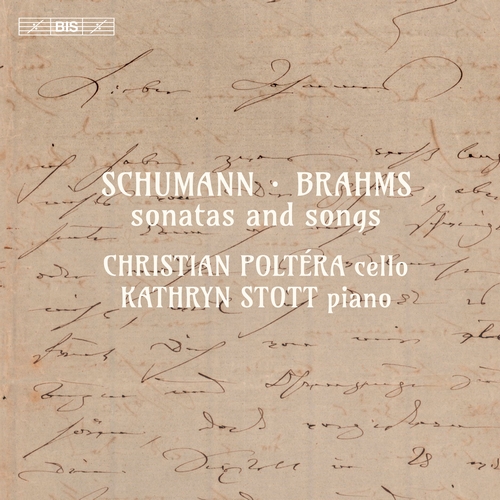 Robert Schumann:
Sonata No. 2 in D minor, Op. 121 (originally for violin and piano)
Intermezzo (Second movement of the ‘F-A-E Sonata’)

Clara Schumann:
Sie liebten sich beide, Op. 13 No. 2
During the eighteenth century the cello gradually emerged from the anonymity of the continuo group, and by the beginning of the Romantic era the instrument had become an indispensable tool for composers. Robert Schumann, who had himself taken cello lessons, was very fond of it, describing is as a ‘beautiful instrument’; and Johannes Brahms, who acquired considerable skill as a cellist, praised its ‘masculine, serious character’. It is therefore to be hoped that neither composer would object to Christian Poltéra’s sensitive adaptations of their works.

Schumann and Brahms wrote three violin sonatas each, both choosing D minor as the key of one of them. These D minor works are the ones that Poltéra – together with Kathryn Stott, whose piano parts remain unchanged – offers on this disc. The two sonatas are separated by the movements that the two composers contributed to the collaborative ‘F-A-E Sonata’ – Schumann’s Intermezzo and Brahms’s Scherzo, and Poltéra and Stott close the disc with two songs – by Brahms and by Clara Schumann, the pianist and composer, and Robert’s wife and Brahms’s lifelong friend.
Recording: August 2018 at Reitstadel, Neumarkt in der Oberpfalz, Germany. Instrumentarium: Cello: Antonio Stradivarius ’Mara‘ ,1711. Bow: Dominique Peccatte, 1850. Grand piano: Steinway D. Płyta wydana w opakowaniu BIS ekopak.