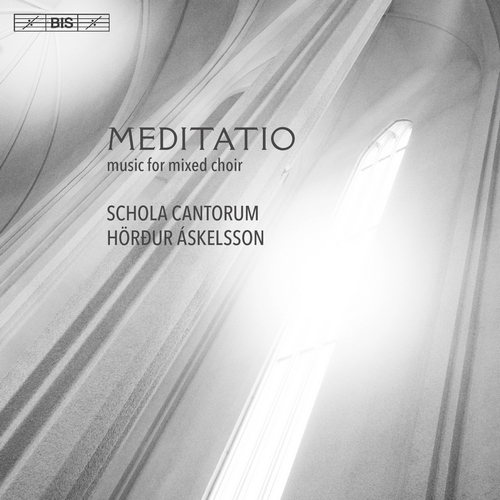 Hrei?ar Ingi:
Nunc dimittis. Arvo Pärt:
Nunc dimittis
Growing out of concerts given by Schola cantorum Reykjavicensis and Hör?ur Áskelsson on All Soul’s Day, Meditatio presents a programme of expressive choral works which interpret grief and bereavement in the light of hope and comfort. Apart from Jón Leifs’ singularly serene Requiem, the composer’s response to the death of his daughter in 1947, all the pieces date from the past 35 years – from The Lamb by John Tavener from 1982 to Nunc dimittis (2015) by Sigur?ur Savarsson, Icelandic composer as well as member of Schola cantorum. The ‘Canticle of Simeon’, as this song of praise from the Bible is also called, appears in two other settings on the disc – by Arvo Pärt and by Hrei?ar Ingi who, like Savarsson, sings bass in the choir. Four other Icelandic composers are represented on the disc, including the choir’s conductor Hör?ur Áskelsson and ?orkell Sigurbjörnsson, whose Heyr, himna smi?ur (Hear, Heaven’s creator) – a setting of a 13th-century hymn – has gained recognition far beyond Iceland. Otherwise the choir performs music by the Latvian composer Eriks Ešenvalds, the Scotsman James MacMillan – his A Child’s Prayer commemorates the victims of the school massacre in the Scottish town of Dunblane in March 1996 – and by Morten Lauridsen and Eric Whitacre, both from the U.S.A. Schola cantorum Reykjavicensis was founded in 1996 by Hör?ur Áskelsson, who remains its artistic director, and has appeared on a number of BIS recordings with music by Jón Leifs. The choir performs regularly in Reykjavík’s famous Hallgrímskirkja where the present recording took place
Recording: October 2015 at Hallgrímskirkja, Reykjavik, Iceland