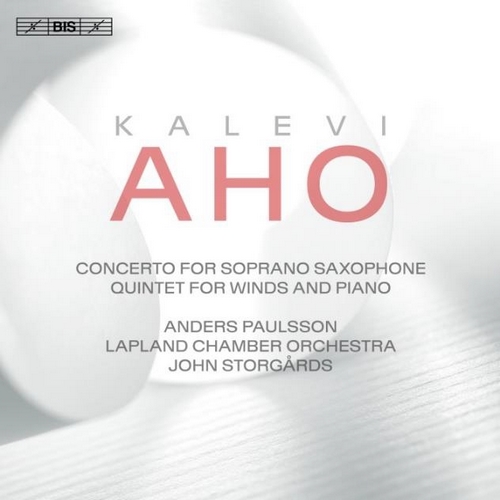 Concerto for Soprano, Saxophone and Chamber Orchestra (2014–15)
Quintet for oboe, clarinet, bassoon, horn and piano (2013)
Solo I for violin (1975)
To date, Kalevi Aho has composed sixteen symphonies and twenty-eight concertos, several operas and a large number of chamber works –a rate of production which is all the more impressive considering the complexity and originality displayed by each new work. On this latest in a long series of BIS releases with Aho’smusic, two of his most recent works are performed by the musicians of the Lapland Chamber Orchestra. The orchestra and its artistic director John Storgardshave collaborated with the composer on several projects, and the Concerto for Soprano Saxophoneis a commission from the orchestra, at the suggestion of the Swedish saxophonist Anders Paulsson. A specialist on the soprano saxophone, Paulssonalso demonstrated the instrument’s capabilities to Ahoas part of his preparations.

The Quintet for Winds and Pianowas composed just over a year before the concerto and is here heard in a performance by the pianist VäinöJalkanen, and woodwind players from the Lapland orchestra. The reason for the unusual combination of instruments is that the work was intended as a companion piece to Mozart’s quintet for the same forces. Closing the disc, finally, is the almost 10-minute long Solo Ifor violin, the first in the composer’s series of virtuosic solo pieces for each of the instruments of the orchestra. It was composed in 1975 and receives a performance from another longtimeAhocollaborator, the violinist Jaakko Kuusisto, who has previously performed the solo part of the composer’s Symphony No.3 for violin and orchestra.
Recording: November 2015 at Korundi House of Culture, Rovaniemi, Finland (Concerto, Quintet); April 2017 at the Kalevi Aho Hall, Lahti, Finland (Solo I)