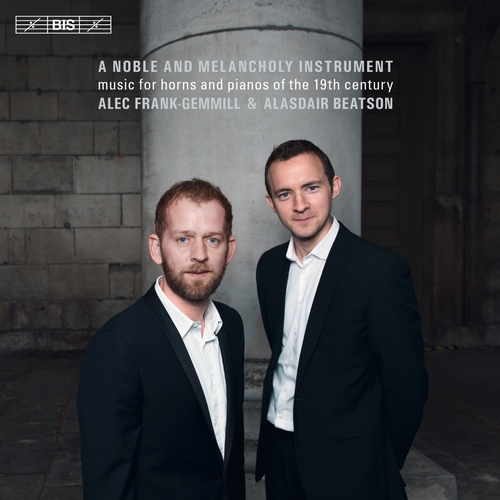 Gilbert Vinter:
Hunter’s Moon (1942)
The 19thcentury saw huge developments in the design of many musical instruments. In some cases changes were adopted more or less universally: the fortepiano that Mozart knew, a five-octave instrument constructed entirely of wood, had by around 1900 grown into the modern grand piano with over seven octaves and a cast-iron frame. With other instruments progress was less streamlined. As late as 1865, the natural, valvelesshorn of Beethoven's time remained the instrument of choice for Brahms when he wrote his famous Horn Trio, and when valves began to be introduced, makers and musicians in Germany, France and Vienna favoured different solutions, offering different results in terms of sound and requiring different playing techniques.

The present disc is a unique combination of recital and history lesson, with a young British team performing music from between 1800 and 1942 on no less than eight different historic instruments: four horns and four pianos. This gives us the opportunity to hear the works on instruments that the different composers would have recognized, whether Beethoven's Sonata in F major(a natural horn from 1800 and a fortepiano from 1815) or the Villanelleby Paul Dukasfrom 1906 (an early 20th-century cora pistons and a Bechsteinfrom 1898). Both notable performers on modern instruments, Alec Frank-Gemmilland Alasdair Beatsonhere revel in the sonic possibilities offered by the historic instruments with results that are as delighting as they are enlightening.
Recording: January 2016 at the Deutschlandfunk Kammermusiksaal, Cologne, Germany