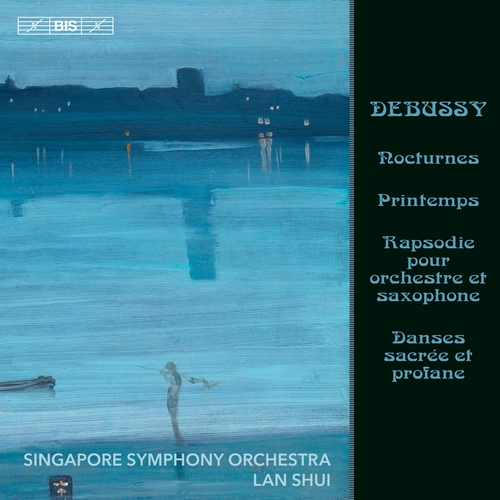 Printemps, L 68/(61)
Rapsodie pour orchestre et saxophone, L 104/(98)
Marche écossaise sur un theme populaire, L 83/(77)
Berceuse héroique, L 140/(132)
Deux Danses, L 113/(103) (Danse sacrée
Danse profane)
Nocturnes, L 98/(91)
The works on this recording were written at various periods in Claude Debussy’s life, and reflect different aspects of him: from a young man stylistically unsure of himself to the confident maître, from a jobbing composer struggling to fulfill sometimes incongruous commissions to a man worn down by illness and outer events. The disc opens with Printemps – a work originally for choir, piano and orchestra written in 1887 during Debussy’s stay in Italy as a winner of the Prix de Rome, but only published 25 years later in an orchestration made by Henri Büsserunder the composer’s supervision. Three of the works that follow were commissions – the Rapsodiefrom a lady saxophonist, the Marche écossaisefrom an American general of Scottish descent and the Deux Dances from the instrument-maker Pleyelwanting to market a new model for a chromatic harp.

Chronologically the last work on the programme, Berceuse héroiqueis Debussy's contribution to a tribute to the king of Belgium at the beginning of the Great War. Having rejected the idea of writing a heroic march in the safety of his own home he instead opted for a lullaby for piano, which he orchestrated the following year. The closing work on the disc, however, is Nocturnes, for which Debussy borrowed the title from a series of atmospheric paintings by James Whistler. Made up of three equally atmospheric movements, it is today one of Debussy’s best-loved compositions for orchestra. Nocturnesalso forms the end of a trilogy of Debussy albums from the Singapore Symphony Orchestraand Lan Shui. Critical acclaim for the team range from ‘superb’ (BBC Music Magazine, about La mer) and ‘unquestionably world-class’ (Klassik-Heute.de, about the orchestra) to ‘a magnificent disc’ – the French magazine Classica’s verdict on the three ballet scores Jeux, Khamma and La Boîtea joujoux.
Recording: November 2015 (Rapsodie, Nocturnes); May 2017 (other works) at the Esplanade Concert Hall, Singapore. Płyta wydana w opakowaniu BIS ekopak.