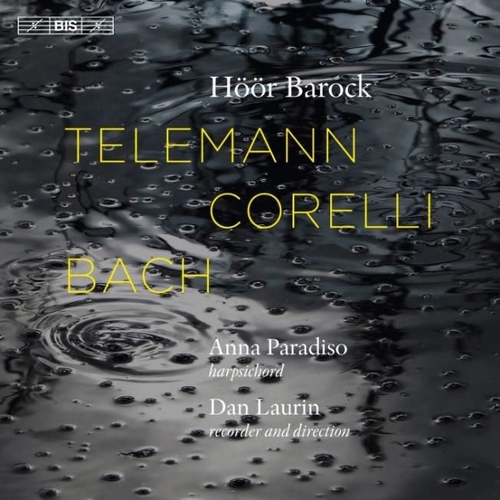 Johann Sebastian Bach:
Concerto in F major, BWV 1057, for harpsichord, two recorders, strings and basso continuo
The young period band Höör Barock, based in the south of Sweden, has chosen a colourful programme for its début disc. With recorder virtuoso Dan Laurin at the helm, the twelve musicians steer a course through Telemann’s celebrated Wassermusik (also known as Hamburger Ebb’ und Fluth) with its sea gods and goddesses dancing bourrées and gavottes before a rowdy crowd of seamen closes the suite with an energetic Canarie.

The centre piece of the programme is Bach’s Harpsichord Concerto in F major, the composer’s arrangement of his own Brandenburg Concerto No. 4. Soloist here is Anna Paradiso, who also plays continuo in the other works of the disc. Bach is flanked on either side by two of the Op. 6 concerti grossi by another Baroque heavyweight, Arcangelo Corelli. His Concerto No. 4 and No. 8 – the much-loved Christmas Concerto – appear here in a slightly unusual guise. They are usually performed by strings alone, but inspired by recent research, Dan Laurin and his recorder-playing colleague Emelie Roos here take on the solo parts, and the tutti ensemble is joined by oboes and bassoon – while a baroque harp adds to the angelic atmosphere of the closing Christmas Pastorale of Concerto No. 8. The disc closes as it began, with Telemann, whose Concerto in B flat major for winds, strings and basso continuo is a perfect example of the composer’s art, involving playful juggling of different instrumental combinations and musical ideas.